The SCGA and its Junior Golf Foundation are pleased to share that one of the Foundation’s longtime participants, Sophia Martinez, is featured in a recent ABC/ESPN documentary, “Our America: Fifty50" - which will air on Thursday, June 23 at 10 p.m. PT on ABC 7. To commemorate Title IX’s 50th anniversary, host Sofia Carson recognized eight young female athletes who have been positively impacted by sports.

The Foundation identified Martinez, who has flourished under SCGA Junior programming for more than 10 years, to ABC/ESPN. This episode documents her journey of growing up in the Southeast Los Angeles community with the reality that young girls of color like her were given limited opportunities to pursue athletics, especially golf.

Thanks to the Foundation’s efforts to develop an inclusive community for all kids in Southern California, Sophia was given affordable access to a traditionally male-dominated sport that has allowed her to thrive ever since joining SCGA Junior at the age of six.

“[Golf]’s got this perception - it’s very exclusive,” Joan Martinez, Sophia’s mother, said. “And not just based on income. It’s also exclusive in terms of ‘it’s for men.’ And SCGA Junior provided that platform [for girls].”

Now 16 years old and influenced by her involvement with SCGA Junior, Sophia is determined to introduce the game to future generations, level the playing field and continue supporting efforts in her community. She serves as a junior volunteer in Player & Youth Development and LPGA*USGA Girls Golf classes in addition to assisting in fundraising activities.

“Sophia’s story illustrates the core of our mission,” said Foundation Executive Director Kevin Gigax. “This was a unique opportunity for us to not only highlight our work on a national stage but also give a firsthand account of its impact among underserved communities in Southern California.”

Watch Sophia's segment in the documentary here; the full episode can be viewed here.

To learn more about the SCGA Junior Golf Foundation and how to get involved, visit scga.org/jgf. 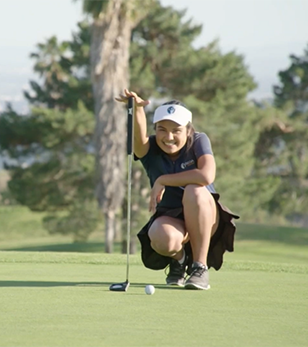