These awards are traditionally presented at the Association’s Annual Meeting and recognize exemplary service to and support of the SCGA and SCGA Junior Golf Foundation from volunteers, committee members, club delegates, member clubs and organizations.

Initiated in 2002, this award recognizes an active SCGA committeeperson who provides dedicated service to the Association that is considered to be “above and beyond the call” of normal committee responsibilities. The award is given without regard to length of service, and is named in honor of former SCGA Committeeman, Director and Past President Jim House, who devoted more than 30 years of meritorious service to the Association. Mr. House was able to present the inaugural award before his death in February, 2003.

This award was initiated in 1987 to acknowledge the many significant contributions made to the game by the late Mr. Smith of Annandale Golf Club, a Past President of the SCGA who unselfishly gave his time and expertise to further the sport and served golfers everywhere through his work with both the USGA and SCGA.

The award honors a deserving individual for outstanding contributions to amateur golf in the Southern California area. The recipient must be a member of a golf club and give extensive and meritorious service to the game. It is awarded only when there is a worthy recipient, not necessarily every year.

Presented to a handicap chairperson for tireless work and effort put in at their club in the promotion and maintenance of the USGA Handicap System. Don Carlson served as the Handicap Chairperson at The Riviera Country Club for multiple decades and was recognized for showing the diligence necessary to effectively serve in this role.

Presented to recognize and honor an active club delegate who has demonstrated exceptional ability in working as a liaison between his or her club and the SCGA. Newell Pinch formerly served as the executive director of the SCGA and was responsible for creating the delegate program.

This award was established to honor SCGA Foundation Founder and former SCGA President, John C. Argue. A leading civic figure in Southern California for several decades, Mr. Argue was most notable for his efforts in bringing the 1984 Olympic Games to Los Angeles. Although John divided his time between business, community and philanthropic endeavors, golf was his greatest passion. This annual award is given to an organization or individual that has made a significant contribution to the mission of SCGA Junior.

This award is annually given to an SCGA volunteer or member club who’s dedicated to furthering the mission of SCGA Junior Golf Foundation. 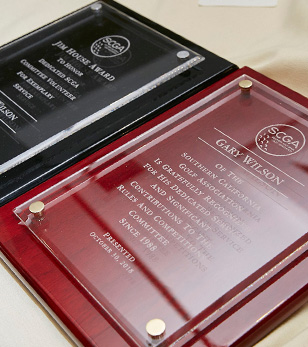