The Long Beach Golf Hall of Fame welcomes Gary Albin, Jennifer Bermingham and David Solomon as inductees for the 2019 year.

“The City of Long Beach has a rich tradition of golf, notable golfers and great tournaments,” said Parks, Recreation and Marine Director Gerardo Mouet. “We want to acknowledge those who were born or have lived in Long Beach and excelled at the game or made it better for those who play it. These inductees represent a significant contribution to the game of golf and golf in Long Beach in particular.”

The Induction Ceremony will follow the conclusion of the Long Beach Open at El Dorado Park GC on Sunday, Aug. 11.

Gary Albin: “Marine One” served as the United States Marine Corp pilot for the Presidential Helicopter for Jimmy Carter and Ronald Reagan. He is a Long Beach resident who joined the SCGA Rules & Competition Committee in 2004 and the Southern California PGA (SCPGA) Rules Committee a few years later. He has worked as the head rules official for over 100 Long Beach Golf Festival events and volunteers for at least 100 days per year for the SCGA, SCPGA and Long Beach Golf Festival as an official or to mark golf courses. He has also offered educational clinics on the Rules of Golf for local men’s and women’s clubs as well as for junior and college golfers. His efforts have led to the proper playing of the game and excellent tournament experiences for thousands of Southland golfers. Jennifer Bermingham: “Coach Jen” was born in Long Beach and prepped at Millikan HS. She attended UC Riverside (UCR) where she was the 2006 Big West Freshman of the Year. She won six college events and was named to the All Big West Team all four years. She won the 2008 California Women’s Championship and 2009 Long Beach Women’s City Championship. Jennifer earned her LPGA Class A and PGA of America Class A teaching status, becoming an instructor at Skylinks GC for eight years. She is active in the SCGA’s Swing Tip video program and has supported women’s programming through the SoCal Women’s Golf Summit presented by the SCGA and SCPGA. Jennifer also established the local LPGA-USGA Girls Golf of Long Beach chapter in 2013, introducing the game to over 100 local girls. She qualified for and made the cut in the KPMG Ladies PGA Championship and has served on multiple LPGA, USGA and PGA Committees. She is now serves as an instructor at Coto de Caza G&RC. David Solomon: David grew up playing the Long Beach municipal golf courses and he lettered at Wilson HS and Long Beach State as well as being the captain of each team. He worked at both Skylinks GC and El Dorado GC and won the club championship at each course. David was the first person to win both the Long Beach City Match Play and Long Beach Stroke Play Championships. He has been a teaching professional for six years in the Northern California PGA Section, where he worked at the Ruby Hill CC and in 2017, he was named the Head Golf Professional at Napa Valley CC. David serves on the Northern California PGA Tournament Committee and has finished among the Section’s Top-5 point winners in four different years, playing in multiple PGA National Club Professional and Assistant Professional Championships. He won the 2015 NCPGA Section Championship and played in the PGA Tour’s Safeway Open that year and was the NCPGA Player of the Year in 2017, which earned him a spot in the 2018 Pebble Beach National Pro Am.

For more information on the Long Beach Golf Hall of Fame and its members, please visit: http://cityoflongbeachgolf.com/hall-of-fame/general-information 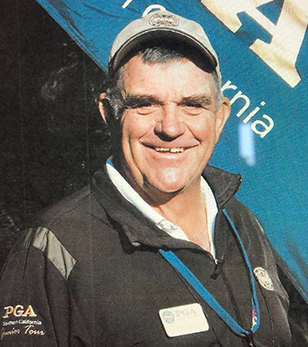