“I’m honored to serve with such a collection of leaders I’m proud to call my colleagues,” said MacFarlane, upon being announced. “I look forward to our year ahead as we work together collegially – as we always have – in service of our members throughout Southern California for the betterment of amateur golf.”

He joined the SCGA Board in 2009 and has supplied his progressive thinking and passion for the game as chair of its Communications and Marketing committee while also serving on its Governmental Affairs committee.

Bob Osborn Jr., who received the Jim House Award, which recognizes the work of an exceptional SCGA volunteer. Osborn has been a dedicated volunteer since 1993 and serves both Course Rating and Championships & Golf Operations.

Bill Fennessy who was named the winner of the Newell Pinch Delegate of the Year Award for his service to the SCGA in a variety of ways including serving on two committees. He is also the President and Tournament Director at Altadena GC and Los Amigos GC.

Ted Johnson, who is a member of three SCGA clubs: Griffith Park GC, Sepulveda Men’s Club and Knollwood GC was awarded the Don Carlson Handicap Chair of the Year Award for his dedicated service as a board member of all three clubs.

Jorge Badel, who received the Lynn Smith Award, was honored for his outstanding contributions and service to amateur golf in Southern California. The award is not given every year.

Bill Misner was honored with the President’s Award, annually given to an SCGA member or member club who’s dedicated to furthering the mission of SCGA Junior Golf Foundation. Misner is a tireless volunteer and advocate who has run events across Southern California and is one of the Foundation’s most trusted volunteers.

William Mouw was named the SCGA Player of the Year Award after a remarkable season that has bridged his high school and college careers. He was the 2019 California Amateur Champion, reached the Round of 32 at the 2019 U.S. Junior Amateur Championship and finished T-3 at both the 2019 CIF-SCGA SoCal Boys and CIF-CGA Boys State High School Championships. He is a freshman at Pepperdine and the 18th-ranked amateur in the world. 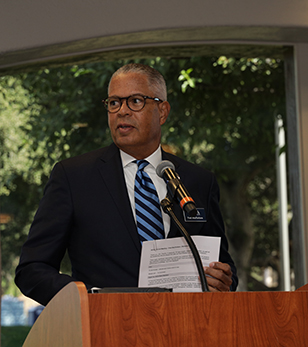