The Longest Day in Golf spanned from sunup to sundown, with 10 U.S. Open Sectional Qualifiers being held across the country.

At the SCGA-conducted Southern California site, 99 players competed for five coveted spots in the 119th U.S. Open at Pebble Beach Golf Links. Playing two rounds – one at Big Canyon CC and one across the street at Newport Beach CC – hopeful qualifiers battled championship nerves and fatigue in a true test of golf.

They say there are horses for courses, and at Big Canyon CC, Stewart Hagestad is a triple crown thoroughbred. Back in 2017, the Newport Beach native qualified for his first U.S. Open at this site, the place where he learned how to play the game.

“My parents tell me that my first words were ‘rake the trap,’” chuckled Hagestad. “I grew up here and I’d be lying if I said I didn’t have a home course advantage over the rest of the field.” After an up-and-down morning round at Newport Beach CC, which included a two-hole stretch of double bogey and an ace, Hagestad fired up the jets in the afternoon at Big Canyon CC. The lifelong member fired a blistering 6-under 66 to secure his third-straight U.S. Open appearance.

“Honestly, that’s one of the best rounds of golf I’ve played," reflected Hagestad.

Fresh off of finishing third at NCAA Championships last week, Arizona State’s Chun An Yu is headed to the U.S. Open yet again, as a back-to-back medalist. “My buddy caddied for me and it was great out there,” Yu said. “I plan to take what I learned at the U.S. Open last year and make the cut at Pebble this year.”

Three-time professional tour winner Richard Lee gave it all he had and then some in SoCal today, with back-to-back eagles and nine birdies on the day to earn a ticket to Pebble.

“I’ve never done anything like that before,” Lee said. “That was a crazy way to start the day.”

Lee is no stranger to the the 119th U.S. Open stage, as he’s played Pebble Beach many times in the past.

“But not in June,” Lee clarified. “That course is very wet this time of year and I hear it’s going to be firm so we’ll see how it goes!”

Hayden Shieh of Fremont, who describes himself as the “weekday-golfer,” had low expectations coming into Sectionals today. But with 14 birdies to round out the Longest Day in Golf, it looked to be enough to take him to the final stage.

"I'm just trying to be a weekend golfer next week,” Shieh said.

Andreas Halvorsen didn't get a full night of sleep before playing, but it didn't stop him on the course.

“I actually thought the qualifier was last Monday,” Halvorsen explained. “We play on the Latin America TOUR and when I signed up we were going to be in Tijuana, so I figured it'd be perfect, it'd be just right across the border, but I had the wrong date and we actually played in Cancun last week. So it was a hassle to get here on time. ”

Halvorsen had never seen these two courses before today, but it seemed to work out just fine as he found 15 birdies, just in time for his 9 p.m. flight back home to Florida.

These five Southern California qualifiers aced their biggest test on the Road to Pebble, but an even bigger test, still lies ahead. 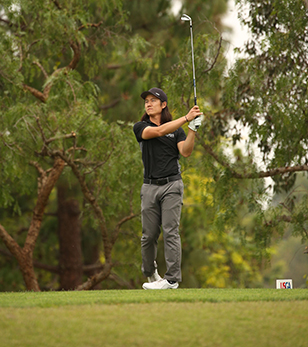