During a course rating, the rating committee evaluates 10 obstacles and measures the distance to each obstacle, as well as the effect it has on scratch and bogey golfers.

All obstacles are given a numerical value ranging from 0 (non-existent) to 10 (extremely significant). All values are obtained from the USGA’s Course Rating Guide. The numbers assigned are based on data gathered by the USGA’s Handicap Research Team, which measures distances to prescribed landing zones and assigns the appropriate values.

The following obstacles are evaluated for each landing zone for both the scratch and the bogey golfer.

Topography: A player’s stance or lie in the landing zone, and whether the player has an uphill or downhill shot to the green.

Fairway: The width of the fairway from which a scratch and bogey player will play his shots.

Recoverability and Rough: The difficulty of a recovery shot from the landing zone or green determines the difficulty.

Bunkers: Difficulty is based on the bunkers’ size and proximity to target areas rather than simply the number of bunkers. Special attention is placed on the depth and severity of the bunkers.

Out of Bounds/Extreme Rough: The severity of out of bounds depends on the proximity of the boundary to the center of the landing zone or green. Heavy underbrush is also rated under this category because a ball could be lost or unplayable. The distance to safely carry the obstacle and multiple occurrences on the same hole are also considered.

Water Hazards: The rating for water and lateral water hazards is based on the distance from the landing area and/or the green. The distance to safely carry the obstacle and multiple occurrences on the same hole are also evaluated. Special consideration is given when a green is significantly surrounded by water.

Trees: The rating for trees depends on the size, density and distance from the center of the landing zone and green. The probability of recovering from various locations within a group of trees is also considered.

Green Surface: Green surface difficulty is based on the speed and contours of the putting surface. Speed is determined using a stimpmeter reading under mid-season playing conditions.

Psychological: The mental effect on play based on the number and magnitude of above-average ratings in other obstacle categories. The location of many punitive obstacles close to a target area creates uneasiness in the mind of a player, and may be reflected in his or her score.

Roll: Adjustment for roll is based on uphill or downhill landing zones as well as the condition of the fairway as soft fairways result in holes playing longer while firm fairways make hole play shorter.

Dogleg /Forced Lay Up: Adjustments are made if the effective playing length of a hole is different from the measured length because of a doglef or forced lay up.

Prevailing Wind: Adjustments for wind are made mostly on seaside courses and courses in the plains states not protected by trees. Wind is also taken into consideration on open courses where the wind is prevalent and generally bows in the same direction.

Altitude: At courses 2,000 feet or more above sea level, corrections are made to the effective playing length of the course because shots travel farther in the thin air. 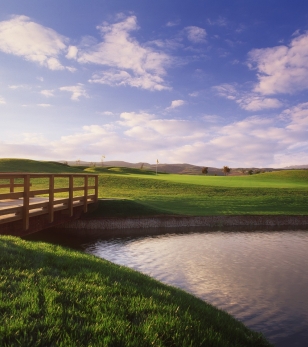