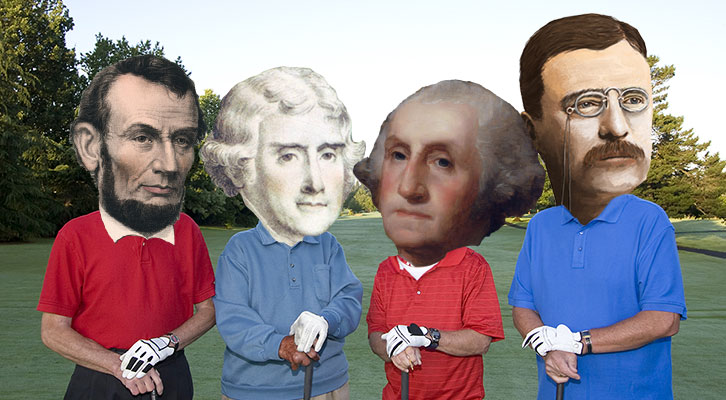 No matter how busy our lives get or how much the world changes around us, we all make sacrifices and decisions to keep golf a part of our lives. The same sentiment can be said for U.S. presidents. Despite having one of the toughest and most time-consuming jobs of leading a nation, 17 of the last 20 presidents actively played golf. Whether it’s practicing their short game on the White House lawn or playing a full round of 18, they still make time for the game. Some made significant contributions to golf, while others were happy to leave it behind once their term concluded.

The real question becomes, how well did they actually play? A fair and logical way to determine their skill is by their Handicap Index®. However, not every president played by the rules or kept track of all their scores, so some of their handicaps may not be officially calculated and should be taken with a grain of salt.

So in honor of Presidents Day, we ranked every presidential golfer by their reported handicap from high to low: Handicap: “I don’t have a handicap…I’m all handicap.”

Fun Facts: That’s right, he didn’t have a handicap because he took about 400 swings for an 18-hole round and hit shots until he liked them. While he didn’t follow the rules, many of his political negotiations took place on the course, including the landmark Civil Rights Act of 1964 that prohibited discrimination.

“I did not see the sense in chasing a little white ball around a field.” Handicap: Not recorded, most likely 30+

Fun Facts: Coolidge played out of obligation and took double digits on almost every hole. He once took an 11 on a 130-yard par 3, although now with net double bogey, he would have saved a few strokes. Once his term was over, he left his golf clubs in the White House.

“Golf is a game in which one endeavors to put a small ball into an even smaller hole with implements ill-adapted for the purpose.” Fun Facts: During his two terms, he played 1,200 rounds of golf, including snow days where he would play with black painted golf balls. With all that play, he rarely broke 100 and once took 15 putts to finish a hole. Again, we should be thanking our lucky stars that we have net double bogey today to save us from that. Fun Facts: Harding was able to get out on the course twice a week, but often scored in the triple digits. Skill isn’t equivalent to accomplishment though as he and Wilson have courses named after them at Griffith Park Golf Club in Los Angeles, CA.

“Golf is in the interest of good health and good manners.” “I suggest you take up golf which, after all, is the best game of all of them.” Fun Facts: Friend of Arnold Palmer and member of Augusta National, Eisenhower played every Wednesday in D.C. and even had a putting green installed on the White House lawn. You can channel your inner Ike at Industry Hills Golf Club in City of Industry, CA. Their course named after him has hosted U.S. Open Qualifiers and LPGA Tour events.

“Golf teaches you honesty. It teaches you discipline. It gives you a strong appreciation of nature. And personal responsibility, something that lacks in our society at times. I mean, it’s only your fault, you can’t blame anyone else when you shank it. Or pick the wrong club.” Fun Facts: Bush didn’t play as much during his presidency as he gave up the game two years into his first term when the Iraq war began. After office, he established the Warrior Open to honor servicemen and at age 72, got his first hole-in-one in 2019. Fun Facts: Barack Obama was the first left-hander in the White House to play golf and played about 333 rounds during his eight years as president. Fun Facts: While he did build a 3-hole course at his own house, he ultimately gave up the game in his second term and even removed the putting green that Eisenhower installed at the White House.

“I know I am getting better at golf because I am hitting fewer spectators.” Fun Facts: Ford was the first president to join the United States Golf Association (USGA) and was the honorary chairman of the first President’s Cup. He also once out drove Arnold Palmer and Gary Player. Handicap: 12, “I actually improved my handicap when I was in office. I was a probably a 16 when I came into the White House and a 12 when I left.”

Highlights: Clinton reinstalled the putting green that Nixon removed at the White House, hosted PGA Tour’s Humana Challenge in Palm Springs, and joined H.W. Bush, Bob Hope, and Ford in the Presidential Pro-Am. However, Clinton had the same tendencies as LBJ and often took mulligans on his first shot until he was satisfied, so the honesty in his handicap is questionable. Fun Facts: His father and grandfather served as president of the USGA, so it’s no wonder he became such a golf advocate. Bush was best known for his fast play he called “aerobic golf” and could finish an 18-hole round in an hour and 20 minutes. He was even inducted into the World Golf Hall of Fame in 2011. Handicap: unknown, but shot in low 80s so estimated around an 8

Fun Facts: Although he didn’t play during his presidency, his golf highlights include a Club Champion title at his golf club in New Brunswick. FDR made a national impact on the game too as he funded public works projects which included the development of 300 municipal golf courses. He would later get his own municipal course named after him, the Roosevelt Executive Golf Course, in Los Angeles CA.

“He (John F. Kennedy) could hit it a ton … but often had no idea where it was going.” – Ben Bradlee, friend of JFK Fun Facts: JFK loved the game but kept his golf outings hidden from the media. Also a proponent of fast play, he often skipped around to different holes and rarely played a full round. This would make the validity of his handicap questionable, but according to the USGA, as long as he played 7 holes for a 9-hole round or 14 holes for an 18-hole round, his score would be acceptable for handicap purposes.

“I don’t know about you, but if you want to keep your handicap in golf, don’t run for president.” Fun Facts: Biden is a member of two golf clubs in his hometown, Wilmington, Delaware, and picked up the game in 2001. During his Vice Presidency, he was often seen practicing on the putting green that Clinton reinstalled.

“The interesting thing is that everyone in golf is just nice. You learn a lot about people playing golf: their integrity, how they play under pressure.”

Fun Facts: Ranked as the Oval Office’s best golfer, Trump has reportedly won 19 club championships and owns 19 golf courses worldwide. His impressive handicap is most likely due to consistent practice as he played nearly 300 rounds during his presidency.

See How You Compare

Don’t have a handicap yet and want to see where you stand among the nation’s leaders? Find a club with that same presidential passion for golf and post a few scores in order to establish your official Handicap Index. You can get started with a free trial here. This way you won’t have to claim that you are “all handicap” when someone asks you about your golf game. To keep it honest, just make sure you’re not following in some of the presidents’ footsteps by taking too many mulligans!

What Do Golf Associations Really Do?