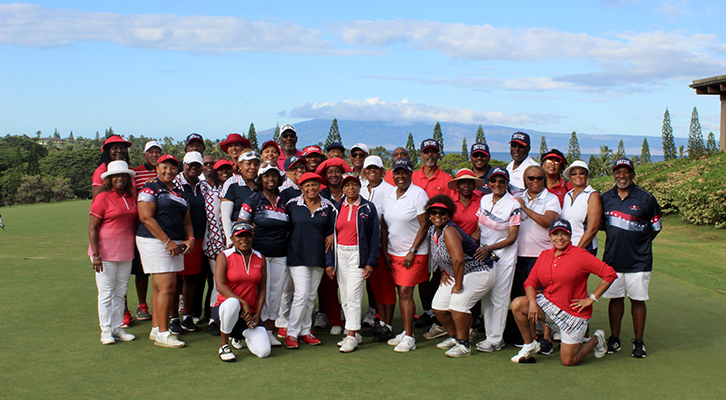 She was bowling with a friend, who told her about an upcoming golf trip she was taking. “It’s with my club, and I need a roommate,” McGehee was told. She wasn’t sure. She’d only been playing golf a short time, and didn’t think her game would be up to snuff to take her on the road. But she loved to travel, so somewhat reluctantly signed up for the event. Only later, when she was introduced in a club meeting as a new member, did McGehee realize the check she’d written included her yearly dues. Planned or not, she was in.

A League of Their Own

The Tee Divas Golf Club was started in 1996 by Doris LaCour, a retired LA County Deputy Sheriff, along with a few friends. The Dudes weren’t part of the ranks just yet. The mission of the club was to offer golf lessons and playing opportunities to women from diverse cultural backgrounds. But in 2004, they opened it up for men to join, and “Tee Dudes” was officially added to the sign on the door.

“Being a member of TDTD gives you a connectedness that you might not get in other groups. For one, we do far more social things than most clubs. It gives you something bigger than golf: it’s the birthday parties, and the dinners, and the dancing. We’re creating a space that builds real, important relationships,” says McGehee. “And we have the Western States Golf Association to thank for helping to start that journey for all of us.”

The PGA of America held a Caucasion-only clause in its bylaws until 1961, which prevented minorities from PGA membership and competing on the PGA Tour. In response to the racialized exclusion by the PGA, groups like the Western States Golf Association were created, providing opportunities and resources for Black golfers to participate in the game.

Charlie Sifford became the PGA Tour’s first Black member in 1961, and the association’s Caucasion-only clause was removed later that year. But that didn’t make competing at golf’s highest level immediately easier for Black golfers. Sifford, alongside other professionals like Althea Gibson, Pete Brown, and Lee Elder later on, faced discrimination from fans, sponsors, tournament officials, and fellow players, across the country for playing on the PGA and LPGA tours.

By comparison, the WSGA became a safe space for Black golfers to learn, grow, and compete in golf. The WSGA inspired other groups of Black golfers to create clubs in their own regions and communities. TDTD is an extension of that legacy, who looks to the WSGA as its parent organization. McGehee says that what sets TDTD apart is its love of travel: the golf trip that started it all for McGehee certainly wasn’t a one-off.

TDTD plans yearly destination golf trips to places like Jamaica, the Dominican Republic, and Maui. “Golf is a great way to see the world with a new perspective. I’ve been to Hawaii before, but it’s a totally different experience when you go there to play golf. You get to play in one of the most beautiful places in the world, hitting shots right along the Pacific Ocean, and not caring if the ball ends up in the fairway. When we travel now, I’m going as a golfer, not just as a tourist.”

As for many golfers, the past two years during the pandemic has given TDTD the opportunity to take stock, reflect, and chart a path forward, using the golf course and its community as a space to heal. While the global shutdown put a pause on TDTD golf trips, the club took the time to focus on growth and additional services.

“When we began 2021, we thought we were on our way back to some semblance of normalcy. As we start 2022, we realize that we have a new normal. We are blessed that we lost no members to the coronavirus,” McGehee wrote in the club’s 25th anniversary newsletter.

She goes on to share the successes TDTD has celebrated in the last year. The club has added new members; they revamped the club’s financial and organizational structure; they invested more heavily in junior golfers, and held their first Junior Golf Achievement Celebration; they celebrated their 25th anniversary with a 68-player tournament.

“Our club has a vast age diversity. In order for us to carry on, we need young people to help take over, down the road,” McGehee says. “We schedule two or three tee times every month for some of the junior golfers to play with us ‘old people’. We’re mentoring them as we’re playing with them, and trying to help prepare them for success in the future.” Last week, McGehee and other TDTD members joined the Cameron Champ Foundation’s inaugural Junior Golf Clinic at Chester Washington Golf Course, one of the first local courses to desegregate and become a home for Black golfers in Los Angeles. “It’s so important that the Camerons and the Tigers and the Tony Finaus of the world are bringing golf to where the kids are. I see a big change coming about with African Americans and golf, in not just saying ‘we can do it’, but ‘we should do it.’”

As for the future, McGehee is focused through her role as president on obtaining 501c nonprofit status for TDTD—an effort to bolster the club’s scholarship, in the name of her late golf teacher, Gale James.

“Our juniors are our legacy. Where they go is where our club goes. We’re developing our juniors, started with eight or nine kids, and now we’re up to nearly forty. We want to continue to make partnerships with organizations that can keep bringing golf to where kids are. Help us to keep the kids going, which will help keep our club going.”

Visit their websites for more information on Tee Divas and Tee Dudes Golf and the Western States Golf Association.