This Championship is open to SCGA members with a Handicap Index of 5.4 or below. Players must be 25 years of age or older. Players must qualify or earn an exemption into the championship field.

It was a long time coming for Stephen Hale, and it sure wasn't easy. The former Cal Bear needed to hold-off five-time SCGA Mid-Amateur Champion Tim Hogarth and defending champion Torey Edwards in a three-hole aggregate playoff for his first-ever SCGA individual title.

Hogarth began the final round with a 2-shot advantage over a stable of yearly contenders and savvy veterans. His championship-low opening round 4-under 67 set the pace for the top of the leaderboard and followed with a second-round 70, giving himself a small cushion heading into the final round of the 54-hole event.

Cullen Brasfield and Stephen Hale were both nipping at Hogarth’s heels to begin the day. Each carded 3-under 36-hole scores and found themselves paired in the final group.

Defending champion Torey Edwards started the final round three strokes back of Hogarth, but found his stroke early during the final round, opening with a par, then rattling off four straight birdies to take a one-stroke advantage after five holes.

Chaos ensued on the back-nine, with all the suitors heating up. Edwards birdied No. 10, 15 and 16 to post 8-under total in the clubhouse while the drama unfolded. Meanwhile, Hogarth was in cruise control with birdies on No. 10, 14 and 15 before a short miss for birdie on No. 16 and a pulled tee shot into the water on No. 17, leading to bogey.

With Hogarth and Edwards at 8-under, and Hale right behind them at 7-under, the stage was set on the last hole. On the par-5, Hogarth’s drive sailed left and clipped a tree, forcing him to lay up. Hale hammered a drive up the right side, and dumped his approach just short of the green and got up-and-down to post 8-under. Hogarth had a 20-footer to seal the deal, but it came up just short, forcing a three-way 3-hole aggregate playoff.

All three players carded pars on the first two playoff holes (No. 10 and 11) and headed to the par-5 18th in virtual sudden death. Hogarth found the left side creek off the tee, Edwards sliced his drive into the 10th fairway and Hale ripped a low draw right down Broadway, giving him a significant advantage. Up at the green, Hogarth nearly chipped in for par but lipped out his attempt, leaving him on the outside looking in. Next, Hale stepped up to his 25-footer from the fringe and rolled it directly in the center of the cup, leading to a huge fist pump. It was now all up to the defending champ, as Edwards stared down a 15-footer to extend the match but it curled slightly right, securing Hale’s first individual SCGA championship. 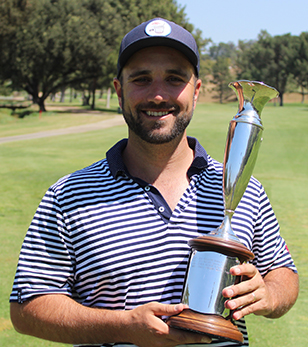