This Championship is open to every SCGA member! Also known as “The People’s Championship,” The SCGA Amateur Net Championship represents an opportunity for every member to compete in a championship administered by the SCGA. Players must qualify for the championship, which is divided into flights based on Handicap Index.

After more than 1,000 initial entries were narrowed down to 160 competitors in the 87th Amateur Net Championship, champions were crowned in four flights on Apr. 20 at Omni La Costa Resort and Spa. The two-day event is affectionately dubbed “The People’s Championship,” and it is the SCGA’s premier net event.

The only player in his flight to shoot under par for both rounds of the championship, Logan Miyamoto (SCGA Collegian Club) finished at -4 to take home the crown in the Arroyo Flight. The senior in high school and SCGA Junior program alumni was one of the youngest players in the field but didn’t let his lack of competitive experience hold him back.

“The back nine was pretty nerve-wracking,” Miyamoto said. “I saw the leaderboard at the turn, and I saw I had a little bit of a lead, but I just tried to stay focused and keep it one shot at a time.”

Miyamoto led after the first round and never looked back.

Making his SCGA championship debut, Mike Hill (Arrowood GC) shot -1 in both rounds of competition to take home the Mission Flight title with a final score of -2. With five birdies in the closing round, Hill outlasted the rest of the field to finish as the only player under par despite a crowded leaderboard for most of the competition.

“It was satisfying to win, I really worked hard for this,” Hill said. “My putting was the best part of my game. It had to be, and it was. I relied on it and it came through.”

Though in the end he pulled away, Hill faced fierce competition from the rest of the field throughout the championship. Robert Steinberg (Mountaingate CC) was the runner-up with a final score of +1 after shooting 70 in the final round. Kelly Faulkner (L.A. City Firefighters GC) finished in third at +3. A card-off decided the results for the final two in the top five with Greg Grohs (Amateurgolf.com) and Darren Atkison (Woodley Lakes GC) finishing at +4 in fourth and fifth, respectively.

With a final score of -2, Kerry Collins (El Prado Men’s GC) was the wire-to-wire champ in the Mission Flight. Five birdies and an eagle carried Collins to victory in the final round.

“I was the leader going into the final round and it was a grind,” Collins said. “Going wire-to-wire is not easy.”

Runner-up Stephen Smith (Coronado GC) was one of only two players to shoot under par in the final round, but his 70 wasn’t enough in the end to catch Collins and he finished the tournament at -1. Rodd Ridder (Almansor GC) +1 finished third, Tom O’Malley (Anaheim GC) +2 finished fourth and Stephen Anderson (Los Verdes GC) +3 finished fifth after a card-off.

After starting the second round seven strokes behind the leaders, Michael Zastoupil (Singing Hills Men’s GC) turned on the jets and fired the lowest score of the day to come away as the San Andreas Flight champion, beating runner-up Timothy Heaphy (Griffith Park GC) in a card-off. With only three players scoring under par in windy conditions, Zastoupil carded four birdies in the final round to finish the championship at -1.

“This is right up there for me in my golf career,” Zastoupil said. “I came in today with a goal in mind and knew if I posted what I could, then I’d be right there. I knew what my mistakes were from yesterday, so I tried not to make them today.”

OK Hee Suh (South Bay Pub Links) +3 was the only woman in the championship to finish in the top five in any flight with her third place finish. Thomas Wong (Lakewood Seniors GC) +3 and Raymond Oloteo (Glendora CC) +4 rounded out the top five. 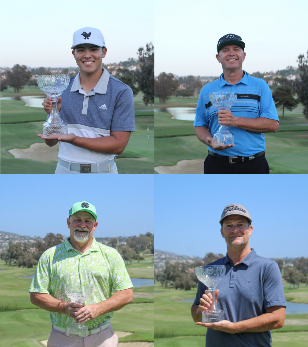