ROUND 2 SCORES ROUND 3 PAIRINGS PHOTOS

Jim Knoll is 18 holes away from grabbing his first CGA Senior Amateur title.

Despite a long golf resume filled with major senior amateur victories, that elusive first win at the senior state title has yet to come for Knoll, a resident of Sunnyvale, Calif. and member of both the NCGA and SCGA. But so far so good for Knoll at San Gabriel CC, where he holds an impressive 7-shot lead over the rest of the field at the 2013 playing of the event, and owns the only two-round total score under par.

After posting Round 1's only red number, a 1-under par 70, on Monday, Knoll demolished the San Gabriel CC course Tuesday, firing a 5-under par 66, one of only two under par rounds. His blemish-free Tuesday included five birdies, and a phenomenal stretch of three-straight from holes 4-6. He sits at -6 heading into Wednesday's final round.

Seven strokes behind Knoll is this year's NCGA Senior Amateur Champion and SCGA Senior Amateur Champion Gary Vanier, who has shot the only other under-par round of the tournament, with a Round 2 1-under par 70 to back up Day 1's 2-over par 73. Vanier is looking to become the first man in history to win all three major California senior amateur events in the same year. One stroke behind Vanier is defending champion Casey Boyns, who has posted rounds of 71 and 73.

The CGA Senior Amateur Championship began in the fall of 1992, and is the state championship for players age 55 and over. The first two tournaments were played at the Ojai Valley Inn & Spa. In 1994, the event was moved to Poppy Hills Golf Course in Pebble Beach, and in 1995, a simultaneous NCGA vs. SCGA team portion of the championship was added. Starting in 2010, this 54-hole stroke play championship began rotating to selected courses throughout the state. Players must have an index of 7.4 or less and may attempt to qualify at any location in the state.

In the team portion of the competition, NCGA bested SCGA 423-458, giving the team from the North the win for the sixth straight year. 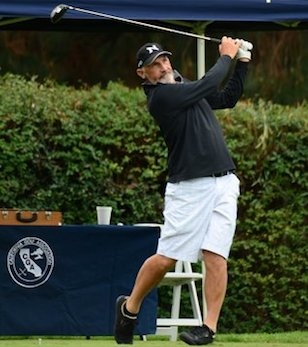