Canyon Lake resident Robert Funk may want to start playing in as many events at Poppy Hills Golf Course as possible.

“It hasn’t really sunk in yet,” said Funk, who prior to his win at the NCGA Senior hadn’t experienced a victory in over two years. “It feels outstanding to win again. I’m very grateful and I’m also very excited.”

A recovering alcoholic who turned his life completely around after once reaching rock bottom, Funk used some of his knowledge from the NCGA Senior in capturing his first California Amateur crown. He’d also win in extra holes at the NCGA Senior, defeating Jeff Wilson.

“Playing in and winning that event certainly helped,” said Funk, who finished regulation tied with Cesario at 2-under 211. “The course is in just great condition. It really fits my ball flight.”

Having entered the final round holding a comfy five-shot lead, Funk would find himself having to dig deep to hold off a hard-charging Cesario. While Funk slogged his way through a front-nine 36, Cesario got off to a blistering start, going 5-under through his first seven holes thanks in part to three straight birdies to open his day. By the time Funk stepped on the tee at the par-4 10th, his lead had been cut to one.

“I finally looked at the leaderboard on No.10, and told myself I better get more aggressive,” said Funk, who’d card a final round 72. “I could see that Greg was coming.” From there, the two see-sawed back-and-forth until the end. Cesario, a 57-year-old who works in player development and sports marketing for TaylorMade, took a one-shot lead into the clubhouse when—following back-to-back Funk bogeys on the 16th and 17th holes—he’d make a birdie for a final round 65. Funk, however, bounced back with a clutch closing birdie on the 18th of his own to get back into a tie.

“I wouldn’t have done anything different out there,” said Cesario, who played collegiately at Arizona State and spent one year (1993) competing on the PGA Tour. “On the front-nine, I was in the zone. My mentality to start the day was to just let things happen. I didn’t go out there trying to force anything.”

For Funk, the event had started as a test of his stamina. On Sunday, a day before play began, he competed in the East-West Matches in Dallas. Due to a two-hour flight delay, he’d arrive at LAX Sunday evening at 11:15 p.m.. He then hopped in a car, arriving at his hotel on the Monterey Peninsula at 4 a.m. A few hours later, he was out on the course on his way to a first-round 70 that gave him a share of the lead.

“That first day, I was really just out there trying to play smart,” Funk said.

Third place went to 2020 MCGA Senior Player of the Year Mark Morgan at 216 following a final round 71.

In the annual North/South Challenge, which pits three NorCal players competing as a team against three SoCal players (best two scores out of three), the NCGA (below) emerged victorious, 293-296. In Tuesday’s final round, the NCGA had the better hands, carding 147 to 150. Team NCGA was comprised of captain Bob Goldstein, Casey Boyns, Jeff Wilson and Mark Morgan. The SCGA was comprised of captain Bob Livingstone, Craig Davis, Don DuBois and Jeff Burda.

Courtesy of the NCGA 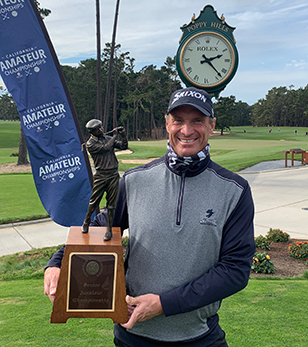