This Championship is open to female amateur golfers with a Handicap Index of 9.4 or below. Players must qualify or earn an exemption into the championship field.

Since its inception, the SCGA Women’s Amateur has quickly become one of the most prestigious women’s championships in the country. Past champions include the likes of Andrea Lee, Lilia Vu and Alexa Melton.

It was a storybook ending to an amateur career. Jaime Jacob wanted to go out on top, with a win in her final non-professional event, and that she did, with an impressive performance in the 6th SCGA Women’s Amateur Championship at Goose Creek GC.

Three days of intense heat wasn’t enough to smother a stacked field of the finest female amateurs in the country as two players broke the SCGA Women’s Amateur scoring record, previously held by Alexa Melton (9-under, 2018).

With daily temperatures constantly in the 100s, the field was clearly unfazed as they shot low round, after low round. Jacob, the defending D-II National Champion from Cal State San Marcos, opened the championship with an unreal round of 8-under, which included a double bogey and an eagle on the back-nine, to pair with eight other birdies. She played solidly during round two, but gave up strokes to the field with a 2-under 70.

Briana Chacon, the Oregon Duck sophomore, jumpstarted her championship with a 4-under 68. The Whittier native was stuck in neutral until she turned on the jets, birdieing the last three holes in a foreshadowing of her second round.

Chacon went off on moving day, firing a blistering 7-under 65 with eight birdies and an eagle to catapult Jacob and sleep on a one-stroke overnight lead. The two engaged in a fierce battle during the final round, with Chacon beginning the day with a one-stroke lead. After a see-saw affair during the front-nine, Jacob made her move. Finding herself in a three-shot hole on the No. 13 tee box, Jacob turned up the jets.

Needing to make a charge in her final Amateur event, Jacob stuffed an approach to four feet for birdie on No. 13, before tapping in another birdie on No. 14 and one more for good measure on No. 15, this time from 12 feet. Chacon remained steady with pars, but the barrage was too much to hang onto her lead.

But on the par-3 17th, Jacob faltered and left the door open after a duffed chip shot from behind the green led to bogey. Chacon parred, and was only one shot down heading to arguably the toughest finishing hole in Southern California.

After two perfect drives, the duo had about 190 yards into the kidney-shaped green. Facing a strong headwind, Jacob lasered a fairway metal to a few feet short of the green. Chacon answered with a towering shot that landing just beyond the flagstick and trickled to the back of the green. Needing a chip-in, Chacon left her effort just short and Jacob tapped in for birdie, and the title. 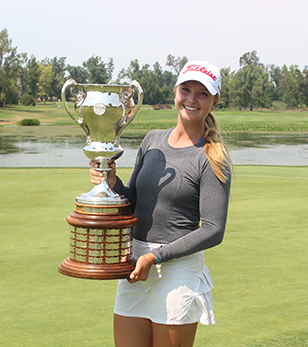