In a crowded field of the world’s top ranked women’s amateurs, it was 17-year-old Alexa Melton who emerged from the dust to claim the 4th SCGA Women’s Amateur Championship at Valencia CC in record fashion.

Joining the likes of Stanford’s Andrea Lee (winner in 2015, 2017) and UCLA’s Lilia Vu (2016), Melton was initiated into esteemed company with the victory. She was the only player in the field to open the championship with two straight rounds in the 60s and finished the championship at 9-under, the best score to par in championship history.

“This week I kept it simple,” said Melton. “I was driving it consistent, stuck it close and made putts.”

The Pepperdine University commit opened the championship with a blistering round of 4-under 69, rolling in three birdies and an eagle en route to putting herself in position to contend. She came right back to top that mark later in the 36-hole day with a bogey-free 5-under 68 to give herself a two-stroke lead heading into the final round.

“I really liked this setup at Valencia CC,” said Melton. “I’m better with tree-lined courses so that played to my advantage.”

Melton opened the third and final round steady as a rock with nine straight pars before birdieing the downhill par-5 No. 10. Looking unflappable, the rising senior rattled off three more pars before her first blemish came at No. 14 when she was unable to two-putt from 40 feet.

Meanwhile, playing with Melton was Zoe Campos who came charging on the back-nine to turn up the heat. Campos started sluggishly with a three-putt double bogey on No. 3 and found the water on No. 6, leading to another dropped shot. But Campos turned things around quickly, birdieing No. 7 and No. 9 in bounce-back fashion.

“Zoe is a great player and she’s also a member here so she had the course knowledge,” said Melton. “I just tried to stay on top of my game and continued to be consistent.”

Campos kept her foot on the gas pedal, birdieing No. 12 and No. 16 to put herself just one shot behind on the 17th tee. After Melton and Campos came up short with their approaches into the monstrous par-4 penultimate hole, both pulled off fantastic up-and-downs to push the championship to the 18th tee.

On the tee, Campos blistered a drive down the left-center of the fairway. Melton stepped up with a strong wind pushing in and from the left. She took a rip but flared the drive right and into trouble. Her ball ended up striking a tree line out-of-bounds and settling in a fairway bunker. She was able to blast out to 160 yards, where she proceeded to stuff an iron to 20 feet from a deep fairway valley.

Campos laid up to 120 yards and had the green light, needing birdie. She put a great swing on the wedge, but flew it a few yards deep, leaving herself with a tricky downhill chip. Campos didn’t make the birdie, but got up-and-down to put the pressure on Melton. She never wavered and drained a 3-footer to clinch the title. Melton immediately hugged her caddy, Kailie Vongsaga, who played a huge role in her success during the final round.

“Kailie is really talkative and she’s very uplifting,” said Melton. “She helps to keep my spirits up and encourages me to not worry too much about the game. I’m glad she was out there with me today.”

Campos finished in sole second place. Lilia Vu, the UCLA superstar and second ranked amateur in the world, placed third, just three strokes behind the winner. Natasha Oon, a San Jose State commit and resident of Malaysia, finished fourth at 5-under. Tied at 4-under and in a share of fifth place were USC’s Alyaa Abdulghany and Arizona’s Haley Moore. 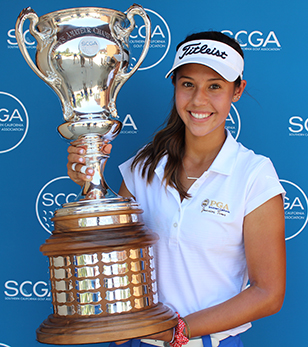