This Championship is open to two-person teams with each female SCGA member having a Handicap Index of 14.4 or below.

Even with a year-long break, the hottest names in SCGA women's golf return in classic form creating quite the barrier for the 2021 Women’s Four-Ball Champion at Indian Wells CC.

Right out of the gate we saw six rounds in the red, featuring the likes of Jamie Hoffman, Kathy Kurata and of course the 2019 Champions, Corey Weworski and MK Zordani. Notably, the duo of Cindy McConnell and Michelle Lint shot the tournament-low round, a 3-under 69.

Day two found more rounds in the red, and eventually led to a tie at 4-under par between Jillian Braverman and Robyn Puckett of GC at Terra Lago and Toscana CC, respectively, and the duo Tracy Rigby and Amelie Zalsman of Redlands CC. It was decided on a card-off, leading Braverman & Puckett to victory! 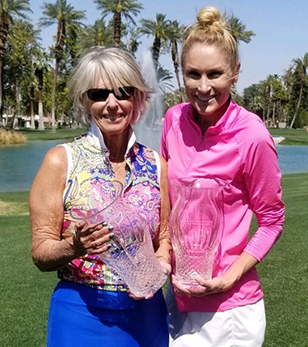