One of the most popular SCGA programs, SCGA Team Play began in 1900 and has grown to include more than 230 clubs and 8,000 participants annually. Team Play is open to SCGA member clubs maintaining at least one 18-hole golf course of at least 5,000 yards in length. Clubs are arranged into groups of four, and their respective 16-person teams play a series of six home and away matches within their assigned group. Group winners then meet in the single elimination playoffs, culminating in the Team Play Championship.

Two SCGA member clubs were crowned champions at Soboba Springs Golf Club in San Jacinto, CA this past week in one of the SCGA’s oldest events, the Team Play Championship.

The 2021 season was anything but quick and easy. The COVID-19 pandemic postponed all starting matches for six weeks and led to other hurdles - including no play within Los Angeles County. Teams had to jump through many logistical hoops to even attempt to reach the end goal – winning the championship. But the passionate community of Team Play persevered and it was these obstacles that made the win even more meaningful and rewarding for our victors.

With 159 total teams this season, it was ultimately Red Hill GC who secured the win for the Thursday division and Antelope Valley for the Saturday division, both of whom are not strangers to the team play champions list.

The Thursday championship was as heated as the weather that summer day at Soboba as Red Hill battled against Antelope Valley after both winning their playoff matches. Red Hill took an early lead in their singles matches and kept this momentum going throughout the championship. They earned their win and finished with a score of 29-19.

100 Saturday teams narrowed down to 32 in the playoffs where winning was not an easy feat. Bear Creek was a notable team who dominated throughout the season until they met their match in the final four and lost to Apple Valley 31-17.

Unlike the Thursday championship, the Saturday division saw back-and-forth scores for Apple Valley and Antelope Valley, so it was really anyone’s game. Even though Apple Valley outscored them 9-7 in the four-ball matches, Antelope Valley took the crown as they won their singles matches 18-14. Antelope Valley proved to be tough competition this year as they had teams go to the championship in both divisions and in the Women’s Team Play as well.

Red Hill Saturday team all played to a zero handicap?? is this correct

I sense a rivalry is in the works! Not Rory and Jordan; Red Hill and LACC! 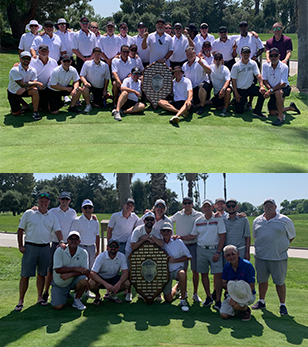