Formerly the WSCGA Executive, this is the SCGA's premier Championship for women looking to compete with a partner in a net event. Two-person teams will compete over 36 holes. Open to female SCGA members of all skill levels who have reached their 50th birthday by the first day of the championship.

Battle It Out: Valerie Robbins and Linda Kueny Emerge Victorious

Finishing at 6-under, they continuously took advantage of birdie and eagle opportunities mid-round in preparation for the difficult finishing holes that Indian Canyons had to offer. It wasn't a gimme, as it took every possible hole to keep that lead against a talented leaderboard. They certainly sealed their fate on day two, firing a 67, the low round of the tournament.

Also with a strong second day (68) were the runner-ups, Melissa Losson and Jeanne Hartman of Industry Hills GC finishing two strokes back at 4-under. In third place, and last team in the red, was McCaffery and Reed of SeaCliff CC, finishing at 2-under. 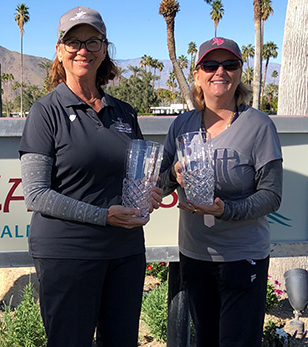