This Championship is open to SCGA members with a Handicap Index of 9.4 or below. Players must be 55 years of age or older. Players must qualify or earn an exemption into the championship field.

The lore of Craig Davis continues to thunder throughout the Southland. The past SCGA Senior Player of the Year became the first player in SCGA history to win a championship for the fourth consecutive year with his victory at the SCGA Senior Amateur Championship at Red Hill CC in Rancho Cucamonga.

The ex-Arizona Wildcat found himself six strokes down to start the third and final day. After rounds of 2-over 72 and 1-over 71 to open the championship, Davis was chasing six-time NCGA Player of the Year Randy Haag. Davis started the day stuck in neutral with just one birdie and one bogey on the front-nine for an even-par 36. On the back-nine, there was no shortage of carnage with the entire field struggling to reach the clubhouse with their rounds intact. Haag three-putted from four feet on No. 12, leading to a 5-over stretch of four holes that had himself on the outside looking in.

Standing on the 16th tee, Davis was one of five players tied at 4-over. The four-time champ proceeded to drain two straight birdies on the par-4s, vaulting himself into the lead by one. After a perfect tee shot to the left side of the dogleg par-4 finishing hole, Davis safely found the green with a 25-foot downhill putt that trickled to two feet and got him into the clubhouse with a one-stroke lead. After Haag’s tough stretch, the NCGA legend still had a birdie look on 18 to force a playoff but he left it just short on a good line. He finished T-2.

Red Hill CC member John Mack, who opened his championship with a disappointing 8-over 80, came back with vengeance during a second round 5-under 67 with eight birdies. Mack hung around all day during the final round, falling just one stroke short.

With the victory, Davis solidifies the SCGA Senior Player of the Year Award.

Good day. During this event what time does it start on each day.  And on the last day what normally (with no playoff hopefully)  does the tournament end. 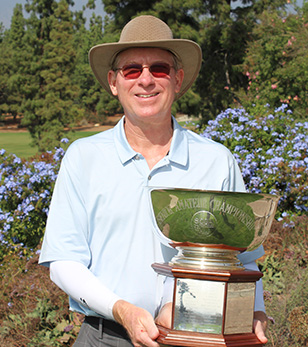