This Championship is open to SCGA members of all skill levels who belong to a public or affiliate golf club.

Long Beach local and Recreation Park GC member Kirk Dancses fired two eagles and three birdies on Friday to put him in a comfortable leading position at Eldorado Park GC and kept it together at Recreation Park GC to seal the deal, finding his place in the champions circle. Glen Anderson and Peter Odorico rounded out the top-3, all going home with hardware.

In the Mission flight, the leaderboard bled red, with John Meehan, also a Recreation Park GC local, finishing at a shattering 12-under. Shaving a cool 10 strokes off his Friday score put him in front of Friday's leader and tournament runner-up, Richard Burns. Robert Scotland of Islands GC rounded out the top three at 8-under.

The Pacific flight was a different story, with our champion Josh Goldstein (Westchester GC) just barely coming through finishing 2-under and two strokes ahead of dual Brookside GC members Bob Hassen and Stephanie Zablot who tied for second.

Register link come up as invalid 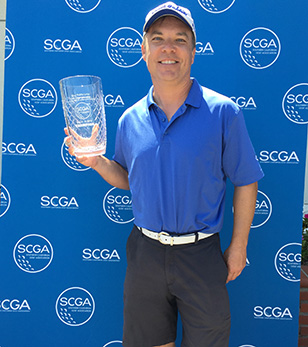