This Championship is open to two-person teams with each SCGA member having a Handicap Index of 7.4 or below.Teams must qualify or earn an exemption into the championship field.

36 holes was not enough to crown the 30th SCGA Four-Ball winner. Team Danny Wax and Daniel Licursi on the first hole of a sudden-death playoff took down the overnight leaders Alton Anderson and Kyler Sauer as the 2020 Four-Ball champions at Dove Canyon GC.

Licursi and Wax (14-under) displayed solid mental toughness after a bogey on the 18th hole gave Anderson and Sauer a shot against them in a playoff. One hole was all they needed as Licursi and Wax saved par to secure the title.

This marks the second time Danny Wax has won the SCGA Four-Ball Championship after he won it in 2015 with Bowen Osborn at Glendora CC.

The runners-ups Anderson and Sauer posted the lowest round of the championship in Monday’s opening round with a 9-under 62. Lincoln Melcher/Jin Nakao and Ryder Epson/Hunter Epson finished T3 at 12-under.

Other notable finishes include Justin Vrzich/Daniel Kim along with Jonathan Minkoff/Ryan Wilkins finishing T5 at 11-under. The defending 2019 SCGA Four-Ball Champions Corby Segal and Stephen Hale finished in 7th at 10-under. 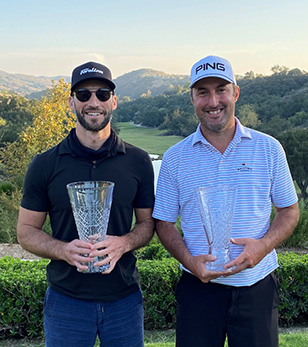