Mark Harding was not thrilled about turning 55 years old earlier this year. But this makes it a little sweeter.

Eligible for his first tournament on the senior amateur golf circuit in California, Harding, of Hermosa Beach, won the most prestigious event on the schedule, coming out on top at the 24th California Senior Amateur Championship, an event jointly run by the SCGA and NCGA. Harding shot a closing-round 2-under-par 69 to earn the 1-stroke victory.

Battling it out with Craig Calkins early, Harding found himself tied for the lead at 5-under-par overall at the turn. The two men had given themselves a 2-stroke lead over the rest of the competition with stellar play on Mesa Verde CC's front nine, with Harding playing his first 9 holes in 3-under par and Calkins lighting it up with five birdies despite double bogey. But the back nine, which played more difficultly all day, was not kind to Calkins, who recorded bogeys on holes 10 through 14 to slide down the leaderboard.

Harding, however, was playing comfortably, earning pars on holes 10, 11, 12 and 13 to build up a 3-shot lead. But at that same time, also playing in the final group of the day with Harding and Calkins, Don DuBois of Newport Beach came roaring up the leaderboard after collecting birdies on holes 11, 12 and 13 to find himself just two strokes behind leader Harding, who found an inopportune time to earn his only double bogey of the three-day Championship, struggling to a 6 on Mesa Verde's par-4 14th hole. A par there by DuBois put the two in a deadlock.

But Harding picked himself up quickly, earning probably the most important birdie of the tournament on the next hole, draining a 30-foot putt to quickly re-take the lead.

Dubois, however, didn't seem to be going anywhere, and stuck his tee shot on the par-3, 176-yard 16th hole to about two feet, while Harding found himself on the green about 25 feet above the hole. But a putt that DuBois himself would admit he should have made did not find the bottom of the hole, and Harding emerged from the 16th hole still with a 1-shot lead.

With two holes to play and an uncomfortably small lead, Harding didn't do himself any favors on 17, a 407-yard par 4 that winds back towards the clubhouse. Well right of the fairway with a number of trees blocking his view of the green, Harding saved himself with a beautiful shot out of the rough, giving himself the opportunity to save par, which he did easily with a chip and a short putt. DuBois, on the other hand, made things harder on himself, bogeying the hole and falling two back of the lead.

Mesa Verde, however, is known for its incredibly tough finishing hole, one the members refer to as the "toughest par 5 on the course," which in reality is a tricky little 186-yard par 3. Needing at least a birdie to make things interesting, DuBois did just that, knocking in a slightly downhill 15-footer to put the pressure on Harding to make his 4-foot par putt for the win. Harding did, and let out a beaming smile of relief as the putt dropped.

"California Senior Amateur Champion," he said. "I like the sound of that!"

DuBois would end of finishing one stroke off the lead in second place, with Calkins also recording a birdie on the final hole of the tournament to earn third place. 2015 SCGA Senior Amateur Champion Gary Vanier and former SCGA Mid-Amateur Champ John McClure would tie for fourth.

The 2016 playing of the event will be held at Lake Merced GC in Northern California. 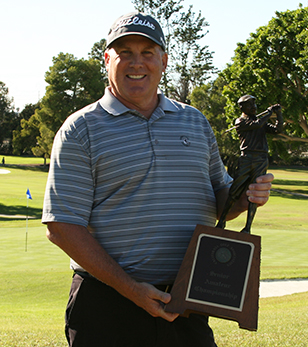