ROUND 1 SCORES ROUND 2 PAIRINGS PHOTOS

There's no doubt Jim Knoll is one of the best senior golfers in California. The dual NCGA/SCGA member has a long list of accolades, one that includes multiple NCGA and SCGA Senior Player of the Year honors, but the Sunnyvale, Calif. resident has surprisingly never won a CGA Senior Amateur Championship title. He's hoping that changes this week.

After Round 1 of the prestigious championship that gathers the best senior golfers in the state, Knoll holds a slim one-stroke lead after shooting the only under-par round at San Gabriel CC. His round of 1-under par 70 bested defending champion Casey Boyns of Monterey, Calif. by one stroke, while Todd Palmaer of Corona Del Mar and Donald Baker of Woodland Hills sit two strokes back after a day one score of 1-over par 72. The Championship continues with another 18 holes Tuesday before concluding Wednesday.

The 6,651-yard San Gabriel CC course proved to be a challenge for the majority of the 102 golfers, as Knoll was the lone player to shoot under par, and there were six times as many bogeys as birdies carded by the field. Knoll was able to navigate through the course with back-to-back birdies on the first and second holes, a 289-yard par 4 and a 525-yard par 5. He went on to collect three more birdies and four bogeys the rest of the way.

Gary Vanier, who is looking to sweep the California senior golf championships on the year after winning both the 2013 NCGA Senior Amateur and 2013 SCGA Senior Amateur, posted a solid round of 2-over par 73 to sit T5. A victory by Vanier would make him the first to sweep all three titles in the same year. Three-time champion Jeff Burda sits within contention, shooting a 4-over par 75 to sit T15.

The CGA Senior Amateur Championship began in the fall of 1992, and is the state championship for players age 55 and over. The first two tournaments were played at the Ojai Valley Inn & Spa. In 1994, the event was moved to Poppy Hills Golf Course in Pebble Beach, and in 1995, a simultaneous NCGA vs. SCGA team portion of the championship was added. Starting in 2010, this 54-hole stroke play championship began rotating to selected courses throughout the state. Players must have an index of 7.4 or less and may attempt to qualify at any location in the state.

With its gently sloping terrain, views of the San Gabriel Mountains and large mature oak trees, San Gabriel CC is one of the most respected golf clubs in Southern California. San Gabriel CC is the oldest golf club in Los Angeles and Orange counties still operating in its original location, with its clubhouse at the same site as its initial 1904 clubhouse. The club has the oldest 18-hole golf course in Southern California, dating from 1912, located on its original site. The club was founded in 1904 on fertile land, which was part of the historic San Gabriel Mission. The 1904 golf course was nine holes with oiled sand greens. The course was enlarged to 18 holes in 1912 by golfer-architect Norman Macbeth. Grass greens were added in 1920 as part of the changes by architect William "Willie" Watson. Further improvements to the course design were achieved by renowned golf architects William Park "Billy" Bell in 1930, Robert Trent Jones Sr. in 1967 and Robert Trent Jones Jr. in 1997.

Your welcome. Tom! Check back Wednesday evening for a video interview with our eventual champion as well!

Thanks for providing this coverage which allows fellow SCGA members to follow the action at San Gabriel CC.  Tom Leslie 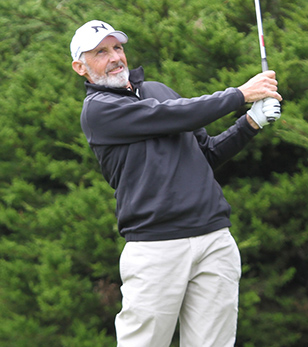