Jim Knoll can cross something off his bucket list today. The Sunnyvale, Calif. resident held off the competition and won his first CGA Senior Amateur Championship.

"This one really does mean a lot," said Knoll after the win. "A lot of my very, very good friends have won this, and to have my name put on that trophy with theirs is really special."

Those that follow senior amateur golf know that Knoll is one of the best in the business. He's reached the semifinals at the USGA Senior Amateur, and won a number of both NCGA and SCGA accolades, including both association's Senior Player of the Year honors. However, before today, he had yet to earn the title of best senior golfer in the state.

Things looked like they would finally go Knoll's way this week, as he finished Round 1 of the 2013 CGA Senior Amateur with a one-stroke lead, and was the only competitor to shoot a round under par. Things got even better Tuesday, when Knoll blazed San Gabriel CC for a 5-under par 66, and extended his advantage to seven strokes heading into the final round of play. But it's not easy playing with a large lead, something Knoll quickly found out.

"I wanted to go out there and play just like I had the previous two days, but the hole locations were a lot tougher and I wasn't hitting the best golf shots," said Knoll, who let his seven stroke lead slip all the way down to one late in the final round. "I sort of lost my putter out there for awhile, and just knew I had to hit a couple good shots to keep my advantage."

The round started out well for Knoll Wednesday, when he just barely missed a birdie putt on one before sinking a tough putt on hole No. 2 to go 1-under for the day. But that's when the tides would change, and the eventual champion wouldn't record another birdie the rest of the way.

Knoll held a five-stroke advantage at the turn, but Gary Vanier, who was looking to become the first person in history to win the CGA Senior Amateur the same year he captured both the NCGA and SCGA Senior Championships, began to make his move. Knoll would bogey four of his first six holes on the back nine, and Vanier looked calm and steady, recording par after par to slowly chip away at Knoll's large lead. Vanier was able to cut the advantage to one through 15 holes, capitalizing on a devastating two-foot miss by Knoll on the 15th green, but was unable to get any closer.

"Being able to finish off the round with those three pars really was the difference maker," said Knoll. "There was definitely a time when I felt it slipping away, but I was able to hit the ball well down the stretch to pull it out."

Knoll would finish the event with rounds of 70-66-76 for a three-day total of 1-under par 212. Vanier finished two shots behind at 214.Coming in third was last year's champion Casey Boyns of Monterey, who began the day tied with Vanier for second. A third-round 76 put him out of contention for the win. Rounding out the top 5 was three-time champion Jeff Burda, who finished nine strokes behind his good friend Knoll, and Iain MacDonald, who also finished T4 at 8-over par 221.

Next year's event will be held at Poppy Hills GC in Northern California. 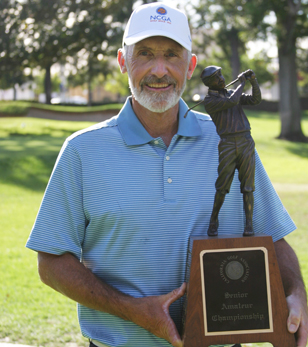