But some of the best golf played by Burda may have come this week en route to his second SCGA Senior Amateur title. With the event expanding to three days and 54 holes for the first time in its 37-year existence, Burda stole the any potential drama away after the first two days of play, jumping out to an 8-stroke advantage with opening rounds of 65 and 67. His first round score of 65 six birdies and no bogeys.

"I really played well those first two rounds, which gave me that nice advantage heading into today," said Burda. "Today, I definitely played a little more tentatively, taking my foot off the gas and playing it safe."

The course played tough, and despite shooting a third round score of 74, Burda's lead over second-place finisher Jim Knoll of Sunnyvale and Doug Williams of Los Angeles extended to 10.

"The course really fit my eye," said Burda. "I had never played it before, but on Sunday I drove through and knew right away that it was going to fit my game well."

Burda, a resident of Modesto, Calif. in NorCal but an SCGA member through PGA West in the Coachella Valley, finished the event with an impressive three-round total of 7-under-par 206. He was the only competitor in the 84-person field to finish under par, with Knoll and Williams finishing with three-day totals of 3-over-par 216. With the addition of one more day and 18 more holes to the Championship's schedule, the SCGA Senior Amateur also had its first ever cut in 2014, bringing only the top 36 players into Wednesday's final round. 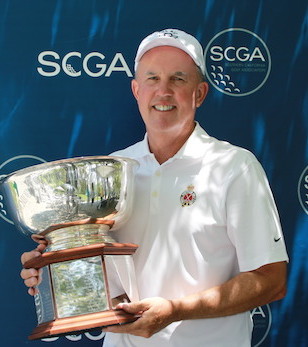