On a scorching day that saw more than 100 Southern California girls competing at Brookside GC, Emiko Sverduk took home the CIF/SCGA SoCal Girls High School Championship individual crown after sitting as the leader in the clubhouse for six hours. Her score of -3 outlasted the entire field for the vast majority of the day. Sverduk teed off in the third group of the day and watched as the scores rolled in, though none matched her own.

“Everything was working for me today, everything was pretty steady,” Sverduk said. “My approach shots were the highlight of my golf game, I got everything really close and gave myself a good look for birdie on a lot of shots.”

“The Golf Pass – I use it almost every day and I get range balls all the time,” she said.

While Sverduk was waiting, fellow SCGA Junior Golf Club member Chloe Lam made a run to challenge for the victory. With three birdies on the day including one on hole 14, Lam finished just one stroke shy of Sverduk at -2.

Despite a challenging and unusual year, Sverduk stayed strong and showed incredible promise. It was the first time the junior from Long Beach Wilson High School had advanced to CIF regionals.

“It feels really nice to win today because I ended my season really well, which I’m really proud of and the competition was really good today,” Sverduk said. “I feel so proud of myself.”

The team side of the competition was just as fierce. It was a nailbiter until the final group finished, with Troy High School coming from behind and defending their 2019 title, taking home the team title with a collective +23. With the victory, Troy has taken home four of the last five regional championships that have been held. Despite being behind Walnut High School for most of the round, their final players showed up down the stretch to beat Walnut by three strokes.

Due to COVID, both the boys and girls championships were held in conjunction at Brookside GC. Under normal circumstances, the top two teams and top nine individuals would advance to the state championship, however that event is not being held this year. So for these golfers, this was the end of the line this season. To view information and results about the boys championship click here. 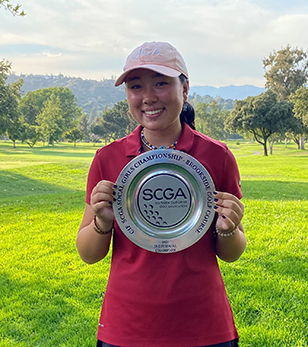