Mark Morgan Emerges From Pack To Win In Runaway Fashion

A tight battle quickly became a one-horse race at the 26th California Senior Amateur Championship at Pauma Valley CC. Coming from two shots behind to begin the day, Mark Morgan went out and shot a championship-best 2-under 69 to seal the victory by six shots over David Nelson.

“It feels really unbelievable,” said an emotional Morgan. “It was a long three days and I’m just blessed to be standing here as champion.”

After an opening 18 holes that saw the course yield only one round under par all day, it was more of the same during the championship’s final two rounds.

Heading into the third and final day, Don DuBois’ model of consistency was atop the leaderboard, maintaining a one shot cushion over John Mack and two shots over Morgan. But as play began on Wednesday, DuBois’ usually solid ball striking suffered and those lurking in the shadows took advantage.

Morgan - one of three players to shoot in red figures during the second round - was cruising through the front nine at 1-under par and found himself in the middle of the ninth fairway when he pulled a short iron into the water surrounding the green. Unable to get up-and-down from the drop zone, Morgan carded a double bogey to bring the field back into contention.

“I made double bogeys on all three days,” said Morgan, a Northern Californian who is also a USC alumnus. “But I came back from them and just hung in there.”

Hope for the rest of the field was short lived however, as Morgan birdied No. 11 and came to the No. 12 tee box with a three-shot lead. The 210-yard par-3 called for a hybrid from the championship leader, which he yanked 30 yards left and out of bounds. As Morgan turned around in disgust, his ball magically shot out of the woods and settled 40 yards short of the green, nearly in the fairway.

After a magical up-and-down for par, Morgan was just warming up.

“You get all sorts of bounces in this game,” said Morgan. “Sometimes they go your way and I got very fortunate to get out of there with a par because after that I just started making putts.”

The Shingle Springs, Calif. resident took advantage of the great break and proceeded to rip off three straight no-doubter birdies on No. 13-15 and a par on No. 16 – five straight 3s on the scorecard – effectively ending the championship.

It was all but over coming down the stretch, with everyone playing for second. David Nelson took home those runner-up honors after finishing 5-over and six men tied for the bronze medal (Kemp Richardson, Scott Anderson, Craig Davis, Dan Sivadge, Mack and DuBois).

In the annual Senior Cup, which pits three players from the SCGA versus three players from the NCGA (best two scores out of three), the SCGA eeked out a one-shot win, 293-294. The victorious SCGA team included defending California Senior Amateur Champion John Pate, reigning SCGA Senior Amateur Champion Craig Davis and Michael Rowley. It’s the second time the SCGA has won in the last three years. From 2008-2014, the NCGA rang up seven titles in a row. 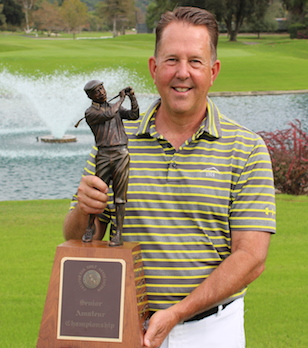