It wasn’t the way Santa Barbara resident John Pate wanted to finish, but it got the job done.

Pate shot a final round 4-over 76 and survived a late charge by Randy Haag, claiming his second California Senior Amateur title in three years by three shots on a cold and blustery Wednesday at par-72 Lake Merced GC. With the victory, Pate joined Jeff Burda (2008-2010) and Jim McMurtrey (1994, 1995 and 1998) as multiple winners of the championship.

“I feel like as a Mid-Amateur that I underachieved,” said the 57-year-old Pate, who finished with a three-day total of even-par 216. “Maybe as a senior I’ll overachieve.”

The keys to Pate’s win came in the first and second rounds, when he posted rounds of 71 and 69, respectively, on a Lake Merced course that was playing tough due in part to thick rough. His 69 came on a day when the next lowest score was a 72. It would give him a comfy 4-shot lead entering the finale.

“I could’ve gone lower than the 69. I left a lot of shots out there,” said Pate, who captured his first California Senior Amateur crown in 2014 at Poppy Hills in his senior debut. “My short game really came through.”

In a final round that he described as a “dumpster fire," Pate. the brother of professional Steve Pate, went 5-over through 17 holes with zero birdies. He’d collect his lone birdie at a perfect time, however, sinking a 3-footer on the 18th to seal the deal. The 18th was the only fairway he hit in regulation.

Earlier on the par-4 16th, he escaped with only a bogey after his ball found an indentation on the collar of the green.

“The ball was down so much that I thought I was going to whiff it,” Pate said. “I was lucky to get out of there with a bogey.”

All the while, Pate also had to fend off a feisty Haag. Looking for his first California Senior Amateur title, Haag made things interesting with a 71 that included three birdies on his back-nine. The Olympic Club member and record six-time NCGA Player of the Year, who’d entered the round eight shots behind Pate, had a chance to apply more pressure on the 18th but missed his 3-foot birdie try. Earlier in his round, Haag missed numerous other putts from within six feet.

“When you’re eight shots behind, you can’t miss putts from within six feet,” said Haag, who came in at 219. “I knew the scores would be there would I could make a run. This course was tough. It played like a championship venue.”

Finishing in a tie for third at 224 were 2012 champion Casey Boyns (76), James Camaione (75) and four-time SCGA Amateur Champion Craig Steinberg (80). Boyns was also making a charge until his ball got lost in a tree on the par-3 12th, leading to a crippling quadruple-bogey.

Coming into the finale, Pate fully expected Haag and Company to make a push.

“I was actually hoping to shoot par,” Pate said. “I didn’t want to get into a playoff and I know my wife didn’t want that seeing that we had a six hour drive home.” 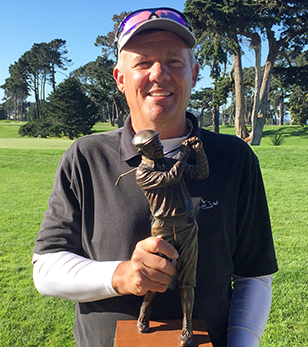