The California Amateur Cup Matches, formerly known as the Seaver Cup, was created in 1998 at the Ojai Valley Inn & Spa as a biennial competition that brings together the best players from Northern and Southern California. The intra-state competition was named in the honor of Charles Seaver, one of the most successful and legendary golfers in California amateur golf lore.

Charlie Seaver is one of two amateur to hold the NCGA, SCGA, and California Amateur titles at the same time, accomplishing this feat in 1933-34 (the other being George Von Elm who pulled out the same feat in 1925). After graduating from Stanford University, Seaver was the shining example of amateur golf in California.

New in 2019, and in an effort to create more programming for women at the state level, the newly named California Amateur Cup Matches will feature men and women competing together.

With the Golden State's bragging rights on the line, the SCGA snapped a four event losing streak as the cup will head south for the first time since 2008.

The SCGA pulled out to a lead on Thursday morning at La Quinta CC, earning 16.5 points to the NCGA’s 13.5 in Round 1 Four-Ball matches. The first two groups out for the SCGA posted vital points, as Kathy Kurata/Caryn Wilson and Jakeishya Le/Erica Wang combined to tally five points in their Four-Ball matches. Later on, Nick Geyer/Stewart Hagestad cashed in three full points for the eventual champs.

Needing to mount a epic comeback during the Singles matches, the NCGA battled hard but fell short as they tallied 28 singles points to the SCGA's 32. The final count score was 48.5 - 41.5 in favor of the SCGA. 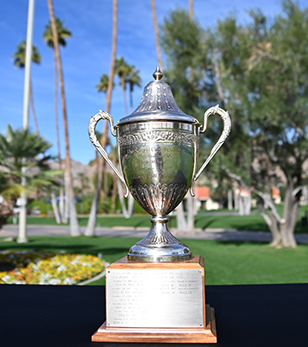