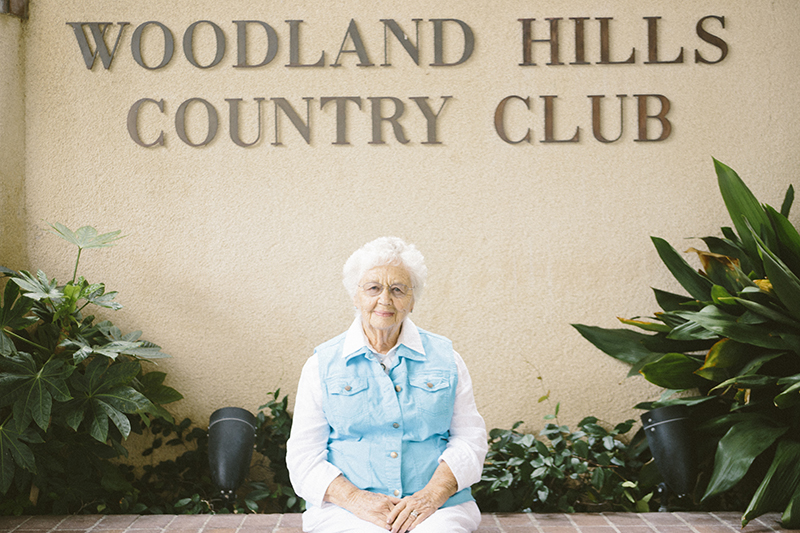 Betty Bowler sat on the outdoor patio at Woodland Hills Country Club on a recent Friday afternoon, dining on Pappardelle pasta and sipping on Jameson whiskey on the rocks. There was a steady stream of friends and workers that stopped by to say hello, so it was as though she was at a family dinner. From general manager Ron Banaszak to members Mark and Francine Hubbard, Claudia and Kevin Kenny and Donna and Dave Mastalski, there was always an an open invitation for Bowler to join their dinner party as well.

For the 98-year-old Bowler, the club was a lifeline in the COVID-19 pandemic.

Bowler is as sharp and spunky and knowledgeable as ever. She’s still the de facto historian of the club, which was recently bought by RW Holdings and managed by Troon. When golf courses re-opened after the lockdown in the pandemic, she continued to dine there a couple of times of week. Much of the time, she drove herself in her 2000 Acura. Her license doesn’t expire until 2023, when she’ll be 100.

Bowler lives by herself in the Canoga Park home she shared with her late husband, Don, and their five children. She has 14 grandchildren and 11 great grandchildren, but most of her family lives in Oregon. After her husband died at age 69, her children wanted her to move to Oregon, but she stayed.

The pandemic posed challenges for so many, but Bowler, who survived a year-long bought with influenza as a teenager in the late 1930s, got through it just fine. She went three places - church at St. Mel Parish (Donna Mastalski picks her up, and after church dines with her at the club), the grocery store and WHCC.

“It’s our home away from home,” Bowler said. “You meet so many friends here. It’s clean. You feel safe coming here.”

Her niece, Cathy Ross, lives in Santa Monica and brings groceries weekly. The Kennys go to Bowler’s house on Saturdays to visit and help her organize things.

“I love her spirit. She is a great ambassador around the club introducing people,” Claudia Kenny said. “She really wants to make that club home.”

Claudia Kenny spent much of the pandemic going through stacks of bulletins, papers and photos in the history office at Bowler’s request. Those were Bowler’s treasures she’d saved from her 46 years as a member of the club (she joined in 1974). She celebrated her 98th birthday in July at the club, with balloons and butterflies.

Kenny took the materials home to go through and had things like a letter from Arnold Palmer framed. It’s all in the office now.

“All the stuff Betty had there, I personally didn’t want to see it thrown in the trash can,” Claudia Kenny said. “There was a benefit to having it. It wasn’t my passion, but out of love for Betty and the respect for all she has put into the club, I took the torch.

“She’s comforted and almost secure. I think she feels she’s put it in good hands. She feels if she were to die tomorrow, that that part of her life is taken care of. History means very much to Betty. To be able to give her that gift, I feel good about that.”

It will be a benefit for all members, past and present, to have information and photos at their fingertips.

“I’d hear from people that their grandma was a member in 1927,” Bowler said. “You meet some interesting people. It’s interesting how many generations of families have played here.”

Bowler was 88 when she last played a round of golf at WHCC. That was a decade ago, but she’s just as much a part of the club’s family as ever, and that’s been a lifeline the last year.