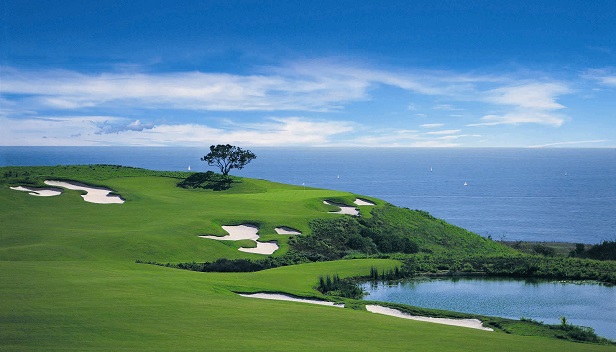 Any time anyone comes up with a list of “The Best” or “Top 10” or anything similar, there will always be those that debate the list because it doesn’t match their personal list. The two golf lists that always spark controversy are Best Golfers and Best Courses.

After comparing notes and researching this, I am going to go with the list compiled by TravelGolf.com because their list only includes courses anyone can get on. There is no question that Cypress Point and L.A. Country Club are both great golf course, but your chances of getting to play them are similar to winning the lottery.

After getting opinions from head professionals, travel industry insiders, architects, personal play and most important, regular golfers, this is the list that they compiled.

Enjoy and let the debate begin.

Don’t get drawn into the hype over PGA West TPC Stadium. Those in the know, know this is Pete Dye’s best work in the Palm Springs valley, some of his best work anywhere. The Mountain Course has you playing right up against the Santa Rosa rocks.

The way Dye manages to make the houses on the course disappear is seriously satisfying slight of bulldozer. This is the rare resort course that seems better the second time you play it. And so on. Designer Tom Fazio went with a links style look at this second Pelican Hill design and it’s paid off with gorgeous views and the feeling of playing golf with sea mist in your face. Located in the wonderland of Newport Beach, Pelican Hill is the Los Angeles area public course you have to play.

Sometimes called the Pebble Beach of Southern California, Pelican Hill holds its spot, while its devotees wonder if the resort will take away from a marvel.

Its reputation may be a little overblown, but not by much. The lengthening to 7,607 yards by Rees Jones a few years ago was really only necessary in the USGA’s eyes, but the coastline views remain dramatic at this La Jolla institution.

There’s still something special about playing Torrey Pines South, even if those waits on the tee can test your ocean-soothed nerves. Designed by Pete Dye to be the toughest golf course in the world, this Palm Springs area legend is actually hacker fun. As long as you’re not playing it from those back tees. The TPC Stadium Course has several memorable holes, with the famous 17th island green, arguably outdone by the largely unrecognized 16th hole that precedes it.

Yet, there isn’t enough scenery to go with the design wonder to earn it a spot in the top three.

This is old-style Palm Springs golf with some spectacular twists. You really do get a sense of history playing out on this course where the houses and mountains seem equally close. You get the fun from the chance to cut a corner on a mountain that’s protruding into the fairway, a hole where you must cross a plunging hill in the middle of the fairway and several inventive par 3s.

At 6,478 yards, Indian Wells’ Classic Course could be considered almost puny by modern standards, which just shows how unimaginative modern golf design standards are. This is a course that will challenge, while keeping you marveling at how relaxed and fun old time golf could be.

This Brian Curley/Lee Schmidt/Gil Morgan design built into a rock quarry in the much-maligned L.A. suburb of Riverside is visually stunning with the rock framing holes. It’s hard to imagine that golf could be this dramatic in an inland SoCal course.

Yet, the par-3 14th is an unforgettable showman with tee boxes on a ledge, ponds below and the smallest green on the course framed by a 400-foot tall white limestone rock wall. Golf Professional Jerry Crowell told TravelGolf.com, “It’s the best inland par 3 I’ve ever seen.”

That may be a stretch, but Oak Quarry’s place in the top 10 is anything but. The first hole has you facing so many bunkers that you may end up wondering if there’s any green at all on this Michael Hurdzan design. It’s all forced desert carries and tucked away greens from there. Firecliff is tough enough that some of the Palm Springs area seniors run from it to play its sister Mountain View Course.

Avoid getting visually intimidated though and this is a fun play with plenty of go-for-it par 5s. Firecliff’s almost immaculate conditioning — there is green here and it’s really green — adds another dimension.

It seems ridiculous to place a course developed by an obscure former major league third baseman (Doug DeCinces) in the top 10, a course in Irvine of all places. Yet Strawberry Farms is that unique, that scenic. In a Southern California area where every available plot of land appears to have a house jammed onto it, this course meanders through hills, boulders and waterfalls. Better yet, most of its natural and fun to play.

For value, there’s not a better course in SoCal. Set on the reservation of the Barona tribe about 35 minutes outside of San Diego, Barona Creek stretches out over rolling terrain with not a single home around.

“I didn’t expect this,” golfer Chung Hang said, spreading his arms wide. “There’s so much … open space. I didn’t know there was this much space anywhere in this part of California. Everything else is so developed.

“Excuse me. I just didn’t expect it.”

Some wail that La Costa is an overrated TV creation, but there’s no denying the power of the 13 through 18 closing stretch at La Costa North (now known as the Champions Course). This a fun, often vexing run of golf, starting with a par 4 that makes you feel like you’re playing in a bread bowl.

Architect Dick Wilson makes the rest of the course, overshadowed as it is by the finish, interesting enough to more than merit this 10th spot. The deep, deep detailed bunkering is some of Wilson’s best work and it was kept alive through renovation.