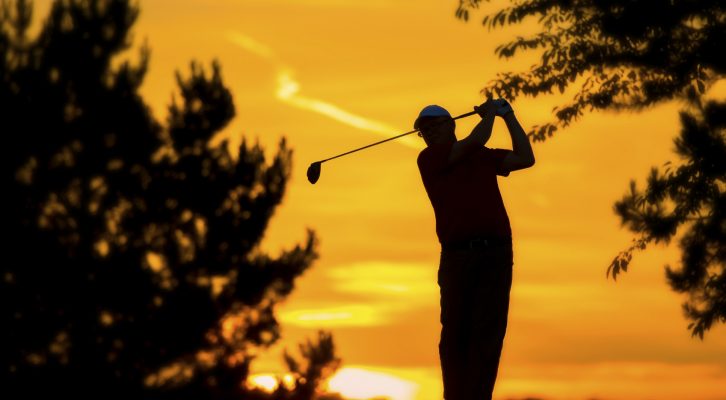 Whether you’ve played golf just once or it’s basically the only thing you want to do in the morning besides go back to bed, you know that the game has plenty of unwritten rules.

Whether they’re rules about following actual, written rules or just things that’ll help you — and everyone else around you — enjoy the game more, there’s plenty of things to know before you hit the links.

Here’s a look at Golf’s 20 Unwritten Rules to live by:

20. Murphy’s Law is Alive and Well

I hate to kick this list off with a negative sentiment, but anyone who has played golf for more than 30 seconds and isn’t a touring or teaching professional (and even sometimes if you are) knows that whenever you hit a great shot, you’re bound to follow it with a horrible one.

It’s not just when it comes to following a good shot with a bad one, either. When you hit a good putt that isn’t perfect, it’ll pop out. When you hit your ball towards the trees, it’s bound to kick backwards or drop directly behind a tree — stuff like that.

I guess Jack Nicklaus said it best: “Golf is not, and never has been,  a fair game.”

Few things have been plaguing the game of golf lately more than pace of play. Blame it on the self-awareness-lacking millennials or the old guard, slowing down and complaining that they “paid to play, too” — but the fact of the matter is golfers aren’t known to be a speedy bunch.

In an effort to speed up non-competitive rounds, golfers know to play “ready golf,” which shelves the idea of someone having the “honor” or playing first or someone being “away” playing first. If you’re ready, you play and move things along.

Seriously, there’s no excuse for 5-hour rounds anywhere but Pebble Beach or Pinehurst.

It doesn’t matter whether you’re getting out of the bunker after hitting our or heading into the clubhouse — Clean. Your Damn. Spikes.

No one wants to putt through the clumps of sand your shoes left on the green and no one wants your grass and dirt being tracked through the clubhouse or restaurant area. It doesn’t take much to tap the remnants of a round off your spikes and it keeps from ruining the days of your fellow golfers.

And hey, you kind of look cool doing it.

The rustling of a flag on the green is an annoying sound and one that can easily be avoided but often times gets forgotten about.

If you’re tending the flag, grab it with your hand and wrap it around the stick. Hold it top down while your buddy putts to keep it from rustling. Next time you’re watching a PGA Tour event, pay attention to the way the caddies hold the stick — it’s the same way you ought to be going about it during your round, too.

16. There’s Nothing Wrong with “Gimmes”

If you’re playing a round and there’s no money on it or no actual competition going on, then “gimmes” are perfectly acceptable.

You don’t want to waste time lining up four-foot putts when you’ve got another group breathing down your neck on a Saturday afternoon at a crowded course.

Not to mention, if you start giving putts to your buddy, then maybe they’ll start giving some to you. And besides, no one wants to deal with the aftermath mentally of missing a four-footer, do you?

Along the line of gimmes, there’s also the unwritten rule of the “breakfast ball.”

Named so due to the time of the day they’re allowed to be used, the “breakfast ball” is an agreement that if the first tee shot of an early morning round goes awry, then the player is allowed to re-tee with no penalty. This is great because it can help a player shake the otherwise deadly first tee jitters.

There’s no written rule against it and many an amatuer have done it — but throwing clubs is a no-go.

Jack Nicklaus’ dad saw him throw a club once when he was young and warned his young prodigy that if he ever did it again, he’d never be allowed to play golf under his roof again. So — good enough for Jack, good enough for you.

If you’re playing with your buddies, it’s fine to talk and chat and be loud (within reason) — but you’ve got to be cognizant of everyone else around you. As ‘Til Tuesday reminded us, voices do, in fact, carry.

Golf is a quite game and most people like it that way. If you need to celebrate a putt, do it — but don’t get carried away. Your match with your buddies may be a big deal but it’s not winning the U.S. Open. There’s no reason to turn the dial up to 11. Be considerate.

12. The Worse the Golfer, the More Advice They Give

Few people on the planet are filled with more advice than average golfers. Mid-handicap players see a struggling high-handicapper and make it their mission to help that player improve — despite their own shortcomings.

Hell, you could be better than that person, beating them soundly in a friendly round and they’ll still offer up advice while you’re beating up on them. It’s a very curious situation and one you should avoid at all costs.

If a high-handicapper gives you advice, take it with a grain of salt. And if you’re the one doling out the advice, STOP!

11. Repair Your Ball Mark and One More

This is a rule that, unfortunately, doesn’t get followed enough and one that’d I’ve heard some pretty crazy excuses as to why it’s not followed: Fixing pitch marks from your shot and one more.

People complain about the conditions of local courses but then turn around and refuse to fix pitch marks because of the conditions. Doesn’t one beget the other? Let’s all start fixing pitch marks — yours and one of your fellow golfers every time you’re on a green.

If you’re new to golf this is one of the best tips you can get to help your survival in this game: Don’t. Step. In putting lines.

We’ve seen professional players get yelled at by their partners for doing so and even fights break out at municipal courses between amateurs over putting lines. Do yourself a favor and remember that putting lines extend behind the ball and past the hole and if you’re not sure whether you’ll be walking through someone’s line, you walk around it.

Trust me, it’ll avoid a lot of trouble.

If you’re playing golf somewhere where there’s a caddie, make sure  you can pay them. The service they provide isn’t to be underestimated — or undervalued.

It’s not quite as bad as not tipping your server or a bartender, but there’s something about playing a course and not having to carry your bag and to have someone there to make sure you’ve got the right club, the right play and the right line when you’re playing a course you’ve either never player or not played in a while.

Club caddies work hard for their money — they deserve to be take care of.

8. Watch Where You Ash Your Cigars

If you want to smoke a cigar on the golf course, that’s cool — just remember that the world is not your ashtray.

You don’t want to be ashing your stogie on the green. That’s a no-go. If you think sand in your putting line is a bad break, imagine having ash in it.

Not only is it gross, but it’s also damaging to the greens. The grasses used on greens isn’t as durable as that in the rough or fairways or your yard and dropping hot ash on them is not only rude, but destructive — so don’t do it.

7. Don’t Make Fun of Players Worse Than You

This should go without saying, but don’t make fun of people who aren’t quite as good as you are. It’s a form of bullying and not cool at all.

Whenever you see someone who isn’t as good as you are — even if they’re holding you up — refrain from joking about their swing or game. Golf is the single most difficult game to learn, let alone master. When you started, there was someone behind you snickering, too.

Remember that feeling and have some sympathy.

6. Always Offer to Tend the Flag

If you’re on the green and near the flag, do your playing partner a favor and offer to tend the flag.

There are a number of reasons to do so, the first of which being it makes seeing the hole much, much easier. It’s also technically a penalty if you hit the flagstick on a putt from on the green. Most of all, it’s just courteous. Don’t make them walk all the way to the stick to pull it when you’re closer. It saves time and is the right thing to do.

5. Keep Rakes in the Bunkers

Rakes belong in bunkers. Period. No one wants to hit golf shots and have them get hung up with a really awkward lie on the side of the bunker because the shot hit a rake and hung up.

4. Faster Groups Have Right of Way

You may not know this, but letting faster groups play through isn’t actually an “unwritten” rule most places — it’s written and in public display for anyone to look at. That being said, so many people tend to ignore it that I had to share it as an unwritten rule.

Listen, there’s no shame in getting passed on the golf course. Sometimes you’ve just got faster people behind you. Better players, players who don’t take practice swings, don’t line their putts up as carefully — there’s a lot of things that go into making one group faster than the other.

Holding up the group behind you out of spite is a pretty crappy thing to do, so let people play through even if you don’t want to. It’s the right thing to do.

A lot of golf clubs have local rules and they should be followed. Don’t ignore them — they’re there to be followed. Just because you’d play a certain shot a particular way at your home course, doesn’t mean the rules allow you to do that at another course.

I mean, I bet Dustin Johnson wished he had consulted the local rules ahead of the 2010 PGA Championship, don’t you?

This is a another rule that should go without saying, “finders-keepers” doesn’t apply on the golf course.

If you find a golf club on the course, you need to return it. Doesn’t matter if your wedges are old and dated and you find a brand-new Titleist Vokey wedge behind the green or someone’s Masters towel lying in the fairway — you must return it.

Remember, golf is a gentleman’s game. And what kind of gentleman would you be to take items your fellow golfer has lost? It’s almost stealing and should be punished as such.

Don’t be that guy — return the clubs and gear you find on the course to the lost and found.

It might be a bit old fashioned to take your hat off before you shake hands at the end of the round — but then again, so is golf.

There are plenty of things about golf’s old guard that should be changed, but the removing of your cap before shaking your opponent’s hand is one that remains and should remain. It’s a sign of respect for your opponent and a reminder at the end of the round that there are more important things than winners and losers.

Plus, you kind of look cool doing it. It’s one of the few moments we can all look like tour stars, right?