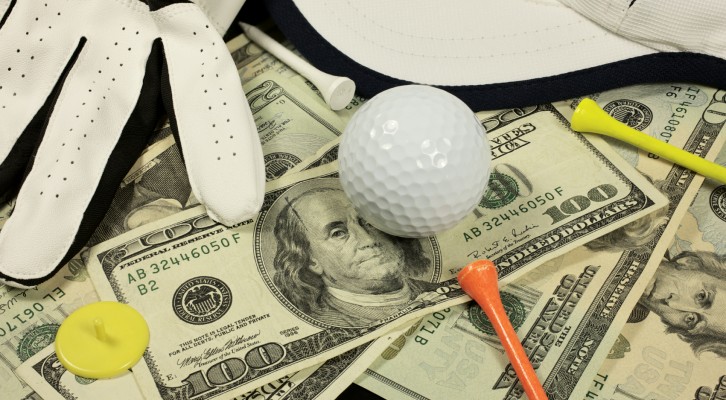 Playing golf by itself can be a lot of fun, but sometimes it can be made more fun.

Let’s face it, most of us will never know what it’s like to play on the PGA Tour. Playing for big money, having to make pressure putts and getting to throw some trash talk around is usually reserved for the likes of Phil Mickelson and John Daly.

That being said, there are plenty of little games that you and your golf buddies can play that’ll make you feel like you’re playing on the biggest stage

Here are 8 great golf betting games you can play, regardless of your group size or ability levels: If you’re a serious gambler and a serious player, then “Let it Ride” is the game for you. If you’re not close to a single digit handicap or someone who is afraid of losing their money, then you should avoid this game. It can be a bit tough to follow and painful losses can ensue. Here’s how to play:

As you can see, you’ve got to be pretty-damn confident in your abilities if you’re going to play “let it ride.” There’s very little room for error when you’re trying to be consistent and point values are increasing that rapidly.

That being said, I’ve played a few times and it’s a blast — especially if you don’t throw too much into the pot.

One of my favorite games to play with a foursome of varying talent-level players is “Quota” — a game that levels the playing field and awards points for making low scores. Here’s how to play:

Quota is a great game for a number of reasons, most of all because it pretty much levels the playing field for everyone. I mean, you probably don’t want a scratch golfer playing against a 2-handicap in this situation, but a 5-handicap v. 10-handicap is a perfect scenario.

If, for instance, you value bogies at a points, par at 2 points, 4 points for a birdie and 8 for an eagle and you’ll usually be able to keep things pretty close unless someone has a very bad — or good — day on the links.

Playing with a group of guys who love “gimmes” or who you’ve never seen make a 3-foot putt in your life? Then “Snake” is an awesome way to A. take their money or B. learn how to become a better clutch putter. Here’s how to play:

Seriously — you want to get better at putting and fast? Play snake with your buddies and you’ll start making those three, six and eight footers that normally would make you tremble like the San Andres with regularity.

“Bounce back” is a great game for amateurs to play because it rewards the ability to recover. It awards points to players who make god scores after bad holes. Here’s how to play:

Like “Trouble,” “Bounce Back” doesn’t necessarily work as a main wager game, but it is a fantastic side game and one that anyone can play. There are a few ways to score the points — which makes it easy to mold to your particular group.

Of all the games mentioned here, dots may be my favorite. It allows players of all abilities to have a shot at making some cash, no matter how bad the rest of their round was. Here’s how to play:

At one point, Hoover made his only birdie of the round on a hole worth 7 dots. That’s incredible, isn’t it? That’s what makes dots so much fun — you don’t have to have the best round to be “dot man.”

It’s been said that the most important shot in golf is the next one — and that’s exactly what “Trouble” rewards. For amateurs, the recovery shot is more important than anything else. “Trouble” gives point values to bad shots and rewards the player who gets out of trouble the best. Here’s how to play:

“Trouble” isn’t always the best for a main wager, but it’s a phenomenal side-bet game and one that really puts pressure on players to get better at making decisions and getting out of trouble. It’s a lot of fun, and if you play often enough, you’ll be shocked how quickly your game gets better.

Probably the most straight-forward game to play is just a regular-old match-play round. Everyone knows how to do play, everyone knows the rules:

Match-play is a classic format that has been around forever. It’s the easiest way to have fun with your golf buddies because it doesn’t really reward any one type of player more than the other — especially if you play using handicaps.

Considering most mid-level amateurs usually can attribute a bad round to a couple of bad holes but are also capable of making pars frequently and a couple birdies, match-play is a great game to play because that rogue “9” on a hole won’t necessarily cost you the match.