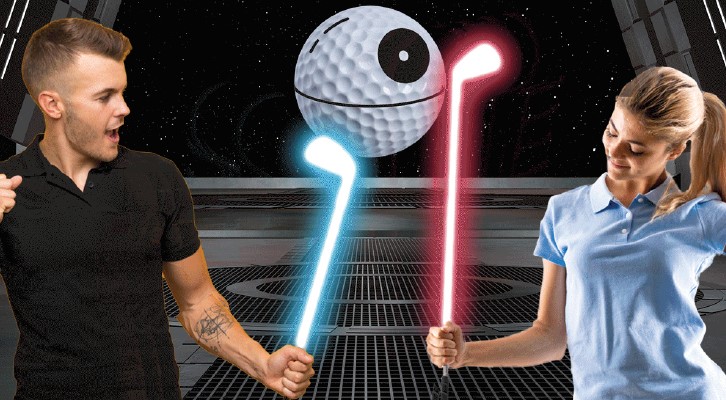 Men are typically better than women at golf. This is a big statement to say, especially coming from a female golfer like myself, but before anyone doubts this, there are some statistics to back this up. The USGA released a report about the distribution of Handicap Indexes between men and women:

So the questions is, why do men have lower handicaps than women? Frances Nee, Assistant Director of GHIN Association Services and Cindy Cooper, Manager of Handicapping and Compliance at the USGA help discuss their thoughts on potential theories as to why this distribution exists. According to the National Golf Federation (NGF), 24% of on-course golfers are women and as a whole, there are more men playing golf in general and not just on courses. In addition, “Females represent a disproportionately higher percentage of juniors (34%), beginners (36%) and off-course participants (45%) than they do in the overall golf population”. Since there are more women just starting out or practicing elsewhere, they are not establishing a Handicap Index or if they are, then it would most likely be on the higher end. From the chart you can also see that 37% of “very interested” non-golfers are female, so if these women take a chance to become golfers, then maybe we will see a change in the distribution.

There could be other factors that make women not maintain their Handicap Index and play like men do. As goes for anything, life happens. Nee and Cooper explain, “A woman may stop playing golf in her 30s to have kids and not come back to the sport until closer to retirement age. Men might keep their Handicap Index throughout their 30s even if they are not playing or playing as much”.

Cooper and Nee added that the percentage of women players is equivalent to the percentage of scores that they post, but most of those scores are 9-hole scores. Which means if they are not playing and posting another 9-hole round their Handicap Index is not updating either.

Conclusion:  While women do consistently post their scores, they don’t post or keep an Index for long periods of time because of the transition of life stages, which could likely be a cause of this wide gap. Since more women are typically beginners and play more off the course, this could also be affecting their index and would generally lead them to the higher end of the spectrum. By the numbers and their overall habits, men are playing more, so they are probably getting better and lowering their indexes, making both men and women move in opposite directions on the distribution graph. : Men Care More About What Their Handicap Looks Like

So men have lower Handicaps – but that’s assuming they’re being honest about their score posting. This can be said about women as well. There is no doubt that people don’t post all of their scores to make their Handicap look better than it actually is, which as a result creates a vanity handicap.

Vanity Handicaps might also be affected by those who take lessons and those who do not. While males account for about 77% of the golf population and as a result account for the majority of those who take instruction, the NGF has found that women are actually more likely to take lessons. “While 14 percent of male golfers took some form of professional instruction in the past year, that percentage jumps to one-quarter of all female golfers. Additionally, women are much more inclined to participate in group lessons, which account for 25 percent of the golf instruction market”.

Someone who is taking lessons might be more open to accepting a score of 110 as they are working on improving their game and might want to critically evaluate their scores and track their progress. On the other hand, a golfer who does not take lessons and had a bad round might be more embarrassed to even post a score in the 90s.

Conclusion: While this information assumes that men are fudging some of their scores or not posting their higher ones, there is no real data to show that men do this more than women. Even if more men were doing this, there would really have to be a significant amount of them to cause such a gap. So while this does happen, it might not be one of the greater causes of the distribution gap.

One might think that this is a relevant reason, because if men play in more competitions compared to women then they must be practicing more and therefore getting better and obtaining a lower Handicap. The SCGA itself certainly has more events exclusively for men than women (85 vs. 25) because of the demand (or lack thereof).

However, the USGA believes this is not a significant cause of the distribution gaps. “Overall the number of players that play in competitions I would estimate is less than 10%… in fact we would expect those who play competitively would have a higher Handicap”.

There is a big difference in competition levels. Club competitions could have less at stake and anyone can usually join so maybe players don’t practice as much as you would think. Competitions that golf associations host, such as USGA qualifiers, have certain requirements and often lead to big championships and awards. While these types of players may be more skilled and have lower Handicaps, they might face more nerves or pressures that cause them to have a worse round, which could lead to the higher handicaps that Nee and Cooper brought up.

No matter the competition, most competitive scores get posted by the hosting parties. If you had a bad round, it’s getting posted, so you can’t hide a bad score in attempts to keep your handicap low.

Conclusion: Not a relevant reason. The number of competitive players is far too small to create a big impact, and if it was higher, it might even bring the gap closer.

Theory #4: The Handicap System Itself is the Problem

A system that’s used worldwide couldn’t possibly play a role in this. Or could it? Nee and Cooper argue, “Potentially and that is why you see some of the changes when the WHS [World Handicap System] was rolled out last year. The idea is for the WHS to be more inclusive (e.g. expanded the maximum Handicap Index to 54.0) and encourage players to get a Handicap Index”.

Some of the other changes include getting your index updated the day after you post, needing only 54 holes instead of 90 to establish an index, having a maximum score of net double bogey, and adjustments from course and weather conditions. All of these changes arguably make establishing an Index easier and accommodating to all skill levels.

Conclusion: These changes if anything have probably brought men and women closer than they were before. Not needing a large amount of scores posted to establish an Index and having a maximum score limit would be more inviting to women who don’t play as much or who are just starting out and would keep them consistently playing so they can track their progress.

Golf is not an easy sport and when you see people crushing 300 yard drives on the range and course, it might motivate you to play better, but it can also be incredibly intimidating to see. Nee and Cooper also added that if women don’t have friends to play with then they risk being paired with strangers and groups of men on the course, which can be daunting for women too. This will keep them from playing on their own or branching outside of their circle of golfers. Beginners especially tend to walk away from the game more easily because it’s harder to get comfortable on the course and around other players, they lack confidence in their own skills, and it’s harder to experience “shot euphoria” as the NGF calls it.

Conclusion: This is definitely a likely cause. It is easy for women to feel discouraged in this game, especially as they are just starting out. This would keep them from going out to play and posting scores so their Handicaps never lower.

Golf clubs are an easy way to alleviate this feeling for any player. If you join a club, you’ll have a great support system of players who can help you be the best player you can be by getting you out on the course. They’re a great way to meet like-minded people so you’ll never have to play golf alone. It’s also a great way to ease into playing in competitions while still being social. Plus just by playing more and getting more tee times with clubs, you’ll see your score improve, which will help your Index; so it’s really a win-win and might even be a solution to all of this.

There are a number of factors that go into why handicaps are the way they are for each gender. I would love to see more women get out there and play on the course to try and bridge the gap, however it does give me hope that the future generation of golfers, the current juniors, are already doing that.

If you take a look at USGA Juniors, you’ll find that the average Handicap Index for girls is +3.0 and boys +2.9, which is significantly lower than adult players and has a very little gap between genders. This could be because they have more time to play and practice, golf can be tied to school extracurriculars, and there are many playing opportunities available for these juniors. Regardless, it’s going to be critical to keep these young golfers playing so that this equal distribution continues as they grow older and move through more life stages. Making golf more accessible, creating more youth programs, and letting them enjoy the game with friends and family will help foster a long-term passion for the game and hopefully bridge the gap for future generations to come.