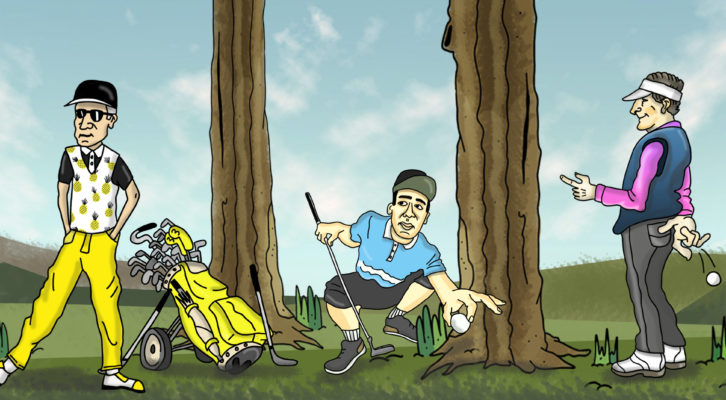 9 Types of Cheaters Every Golfer Knows

When you have a sport like golf where the rule system is based around individual honesty and integrity, it’s inevitable that there will be players that exploit this to their advantage. From minor adjustments to your ball’s lie to straight up lying, there’s no shortage of ways golfers can find to artificially improve their game. Keep reading for our list of the most common rule circumventers you’ll find on the course, and remember what they say: if you can’t spot the cheater in your group, it’s probably you.

Favorite golf partner: the “random gust of wind” that moved his ball

Catchphrase: “I get free relief from this, right?”

Frank has never met a lie that couldn’t be improved. He’s not afraid to call out “winter rules” even though it’s the middle of July. According to him, you can move your ball if it’s behind a tree, in a bush, underwater, or on a brownish patch of grass.

Preferred tee time: Doesn’t matter, will show up 5 minutes before regardless

Look, if we’re playing a casual round first thing in the morning and you haven’t had time to get loose, go ahead and hit another one of the tee. But you’re not getting a mulligan on the 4th hole because that was your first shot with the 5 wood and you couldn’t manage to get there early enough to hit the range.

When asked how he achieved an incredibly low putts-per-hole average, Gabe credited his brand new Scotty Cameron, the countless hours spent on the practice green, and the fact that anything inside of 10 feet is “good”.

“That Was Par” Pete

Signature move: Looking back at the hole after putting out, gesturing his arm across the fairway 6 or 7 times, then saying “mark me down for 4 there”

Pete can often be overheard saying “I can’t believe I was able to save par there”, always insists on being the one to keep the scorecard, and is somehow much more certain on how many shots other players took than his own score.

Favorite ball: The one in her pocket

Favorite hobby other than golf: Hiking through the woods

Natalie actively avoids using personalized golf balls, as it gives plausible deniability that any ball stumbled upon in the rough could be hers. She also has a list of excuses queued up for how she started the round with a Pro V1 and ended the round playing a Noodle.

Most common complaint: Back pain

A classic case of less is more: not only is it against the rules to carry more than 14 clubs, it just doesn’t make sense. Before you try to justify carrying a 7-wood, a 64-degree wedge, and that bizarre chipping putter thing, think about when you would ever actually use that club, then pull it out of your bag because the answer is never.

Yes, under the rules of golf, asking fellow competitors for advice is not allowed. Looking for a helpful hint during a casual round is one thing, but please don’t be the one after every shot asking “what’d you hit there”? And if it’s a competition, you can bet that you’re on your own.

Trademark: A willful ignorance of the rules

An encapsulation of all cheaters, Reggie plays by his own rules, taking incorrect drops, mulligans, gimmies, and anything else that might give him an advantage. When confronted about his questionable actions, he’ll feign confusion and claim he had no idea that was a rule, despite the fact that you told him the same thing 2 holes ago.

Strokes given: More than he needs

After calling out on the tee box that he “usually shoots in the low 90s here”, Phil will almost assuredly fire off a “career round” of 78. If only there was a verifiable way to figure out exactly how many strokes a golfer should get on any course…oh that’s right, there is. Stop letting Phil take all your money.

No doubt you’ve played with one or all of these cheaters (or maybe you are one yourself). Thankfully, unlike most aspects of golf, there are easy solutions: play the ball as it lies, don’t take mulligans, putt everything out, be honest, and keep your Handicap Index. Simple, right?

We’ll even help you get started on that last one for free for 60 days. Check it out.

At Home with the Pros