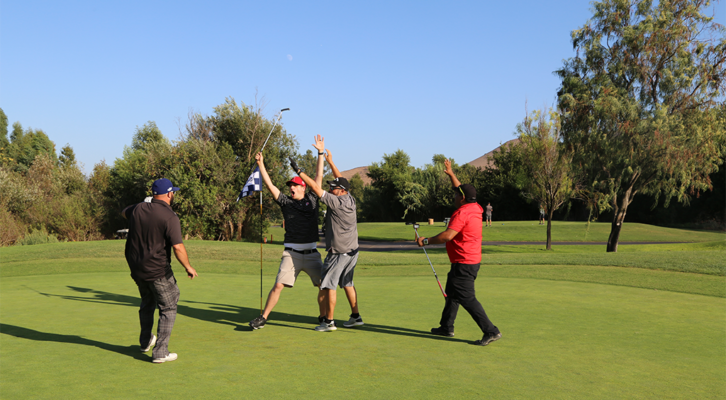 As restrictions on group gatherings begin to loosen, it’s only a matter of time before tournament play returns and golfers will be itching for some action. With this in mind, I figured there’d be no better time to break down my 10 favorite types of golf tournaments to help you start planning for when it’s time to hit the course again. I’ve included some pros and cons for each to help you build your club’s schedule and keep things fresh for your members.

No tournament schedule is complete without this tried-and-true classic: Gross Stroke Play. Play just like the pros with no handicap to hide behind. Players record an individual score for each hole and tally it up after 18. Easy peasy—well, easy to keep track of the score at least. But that triple bogey on 14… not so easy.

Pro: It’s the purest form of the game and, especially for clubs with fairly even handicap ranges, it can be a truly exhilarating format because at the end of the round you know that no one in the field shot better than you.

Con: No handicap to hide behind here. Your score is your score—shanks into the woods, ugly three putts and all.

Net Stroke Play is the friendly sibling to Gross Stroke Play and is often run alongside a gross tournament with separate prize pools. It’s scored just like a gross tournament in that players record an individual score for each hole. However, the “friendly” portion comes into play at the end when you subtract your course adjusted handicap from your gross total score to reveal your net total score. Cha-ching!

Pro: You don’t have to play better than the rest of the field, you just have to beat yourself since your handicap is meant to reflect your own potential. AKA all you 18 handicaps just transformed each bogey you shot into a net par. Not too shabby.

Con: Sandbaggers delight. This format tends to favor the higher handicaps as there is more room for error when you’re getting double digit strokes subtracted from your final score. However, your handicap is your handicap, so if you come to play… you’ll still be in the money.

Best Ball is a team format that can be played with two, three or four-person teams. Golfers play their own ball and card their own individual score for each hole. Then, the team records the best gross score from amongst the team members to be used as the “team score” for that hole. A net variation of Best Ball can be played where the team records the best individual net score per hole as the “team score.”

Pro: While this is a team format, it’s still nice to be able to record an individual 18 hole score for your day’s play. You know, have some documented proof that you, in fact, put the team on your back.

Con: Harder for higher handicaps to contribute to their team when playing gross Best Ball as the lowest team handicap will tend to carry the day while everyone else marvels at yet another straight drive into a GIR. Unless you like living vicariously, then step right up!

Moneyball is played with four-person teams and follows the basic rules of a net Best Ball format in that each player records their own net score for each hole. However, the twist comes in whose and how many scores are recorded for the “team score.”

Each team records two scores per hole. Score #1 is the lowest net score from all four players. Score #2 rotates among the team members, meaning that their score counts towards the team score, regardless of how they perform. On the first hole, the player on the top line of the card (aka the team captain) is the moneyball. On the second hole, the second player on the card (aka the first round pick) is the moneyball. Third hole, third player. Fourth hole, fourth player. And on the fifth hole it returns to the first player and the rotation continues. Oh, the glorious, flop sweat-inducing pressure! (Note: if the moneyball is also the lowest net score, then you will record the second best net score.)

Pro: Draft strategy! Similar to the acclaimed 2011 film, the Moneyball strategy comes into play with who you draft and where you draft them. Savvy captains may elect to draft a higher handicapper that they know show up big on tournament day as their first pick to maximize their moneyball holes. This format is great for clubs with smaller memberships where everyone is more familiar with one another.

Con: For the tournament organizer, this one is pretty tricky. The cards each need to be custom marked with team members and designated moneyball holes to avoid confusion. So for larger clubs, that’s probably a non-starter.

Scrambles are typically played with four-person teams. Play begins with each golfer teeing off using their own ball. The team selects their favorite tee shot and all other golfers pick up their balls and place within a club’s length of the designated shot. Everyone hits their second shot and the process repeats. Once the team reaches the green, players mark the best shot and all players must putt from the same ball location.

Pro: Least amount of pressure on an individual golfer as the team has four chances to hit a great shot. Great for large group outings with varied skill levels as the focus is more on fun than individual performance.

Con: No individual scores means nothing recorded for the handicap. Like I mentioned above, this format emphasizes fun over individual performance, so if you’re the kind of golfer that needs that self-gratification… maybe sit this one out.

Match play splits the entire tournament field into two teams. Each match features a one on one competition where each player squares off with only one other, battling it out to win a point for their team. How the gameplay works is that each hole is worth one point. The lower gross/net score per hole wins that player a point and ties are worth no points. The person with the most points at the end of the round wins.

Pro: Great format for large outings in that it keeps team spirit alive while still allowing players of similar skill levels to have an intimate competition with someone of similar skill.

Con: Individual results don’t necessarily mean a team win. Since the winning team is an aggregate of all individual matches, you may beat the pants off your opponent but if your team didn’t show up… no dice.

Skins Pots refers to a giant pot of money that all participants pay into, which is then distributed to the lowest score or “skin” from each hole. In other words, every player plays their own ball and cards a score, just like usual. Then, at the end of the round, all the scores are compared against one another and if one person scores lower on a certain hole than the entire field, they win a “skin.” If two or more people tie for the lowest score, no one wins that “skin.” The total prize pot is divided by the number of “skins” that were won outright. i.e. $100 in the pot, 8 holes were tied by 2 or more people. 10 “skins” won outright. $100 divided by 10 “skins” – $10 paid out for each skin.

Pro: While you record a personal score for the whole round, the format still allows for “blow-up” holes because all you have to do is beat the field on one individual hole to win a “skin.”

Con: With larger groups, the logistics for this game is insane. Since the chances anyone wins a hole outright go down with the larger tournament fields. The solution is to flight the field and offer separate skins pots for each flight. I implore you to avoid calculating this all by hand… fortunately SCGA is there for you with automatic skins calculators baked right into their handy scoring app.

Grab your partner, folks! Alternate shot is a two-person format where (as you probably guessed from the title) each shot alternates between the two golfers. For example, using one ball, player one tees off. Then player two hits the second shot, player one hits the third shot, and so on and so forth until carding a score. Let me say, this format is bananas and will surely produce some wacky scores especially when you mix in higher handicaps.

Pro: It’s a great option for when the tournament formats grow stale. It opens up entirely new strategy in who you pick as a partner as well as constructing your shots to give your partner the best chance for success. Talking yardages and what side of the green you prefer to work can make it feel (even for a moment) like you’re out on tour with a caddie. …I said for a MOMENT.

Con: You will not hit a full round of shots. Since you’re only hitting one ball, by the end of the round, you will only have hit half your normal shots. Because of that, it’s best to pick courses that may be on the cheaper side so you don’t feel like you wasted your money by only playing half a course…

Net stableford is another quirky alternative to your run-of-the-mill tournament formats. For this format, each golfer plays their own ball and cards and individual score for the round, just like normal. However, points are awarded for the score you card on each hole. Per the PGA: Double eagle is worth 8 points, eagle is worth 5 points, birdie is worth 2 points, par is worth 0 points, bogey is worth -1 points and anything double bogey or worse is worth -3 points. Now, before you go spinning off saying how on earth am I… a 20 handicap… going to score an eagle on anything?! Take a breath and remember this is net scoring. The low scores according to stableford points win the day.

Pro: The points system rewards risk-taking as the benefit for a birdie (2 points) is higher than the penalty for a bogey (-1 point)—so don’t let me hear about you laying up in this format…

Con: The net scoring throws a bit of wrench into things for the low handicappers as your eagles will largely need to be earned gross, while your 20+ brethren may luck out with a double pop on a par 3 where they miraculously card a birdie. Double eagle anyone?

Bingo, Bango, Bongo is a blast to both pronounce and play when handicap ranges are all over the place. This game is played within foursomes so it can also be added to another individual-based tournament format if you’re feeling particularly spicy. In this game, a point is awarded for the first ball on the green, a point for the closest ball to the hole and a point for the first ball in the hole. Now, with standard golf rules, the farthest person from the green is supposed to hit their ball first which allows for everyone to get into the mix for each point. The golfer with the most points at the end wins. Pro tip is to keep track of Bingo, Bango, Bongo points on the unused lines on the lower half of the scorecard.

Pro: Very friendly for foursomes where handicaps vary greatly. Just because someone can bomb their drive on a short par four doesn’t necessarily mean they’ll be first on the green since the person farthest from the hole will get first shot… Play smarter, not harder, my friends.

Con: When pace of play is an issue, this can be a slower game format as it discourages “ready golf” since points are awarded based on first to hit green or specific measurements for closest to hole.

Need to find a group where you can try out some of these tourneys? Check out the SCGA Club Finder.

5 Golf Habits to Develop at Home

5 Positives of Time Away from Golf