DROUGHT – THE NEWS IS BAD BUT NOT ALL BAD


At risk of hammering away at what you likely already know, here is how California’s major reservoirs stood as of midnight August 8. 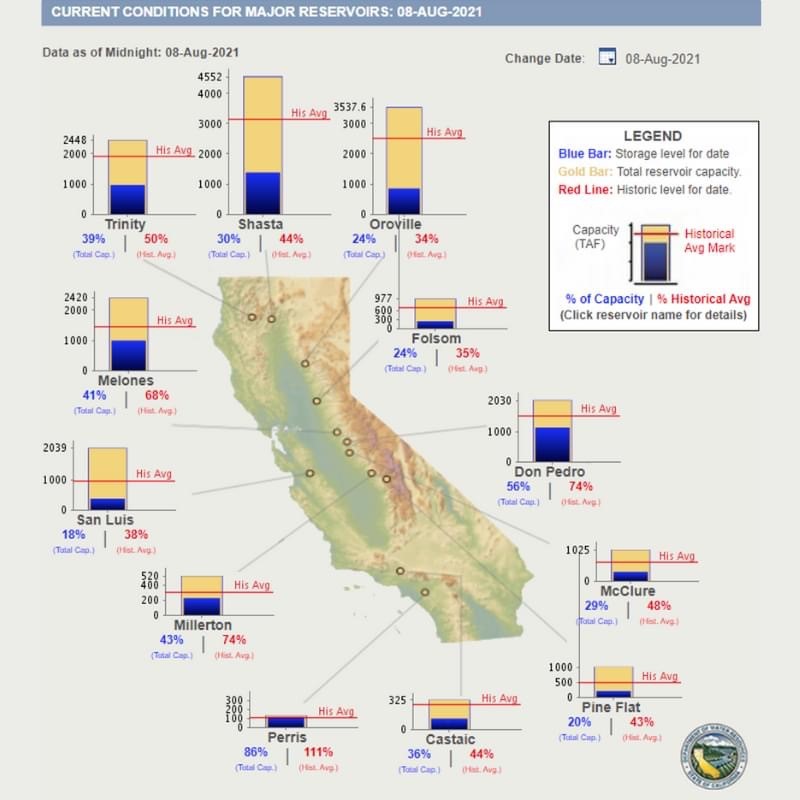 The only thing that has changed in the intervening week is that each of them is lower today, Oroville so much lower that it is no longer capable of generating electricity, another of the ill effects of severe drought. It’s easy to forget that California still derives much of its energy from hydroelectric power.

Speaking of hydroelectric power, the water level at Lake Mead, the Colorado River reservoir serving the Hoover Dam, fell to 1,068 ft. in July, the lowest level since the lake was first filled following the dam’s construction in the 1930s. This month, the federal government is expected to declare a water shortage on the Colorado River for the first time, triggering cutbacks in water allocations to surrounding states, as well as discussions among the states about a more “equitable” allocation scheme among the states in a Colorado River Compact that dates all the way back to 1922. Read that to mean California will be asked to give up some of its current share. Much more concerning is that Lake Mead is only 118 feet above the 980-foot level required to generate any electricity at all. Once the dam descends to that level, the water can no longer reach the turbines that produce the power, and the dam must shut down as Lake Oroville has just done.

If Oroville rings a bell, it’s the reservoir that just a couple of years ago was so full that the spillway used to control releases of excess water collapsed, leading to the flooding that it was supposed to in part prevent. Some argue that this volatility is a strong argument for the construction of more above surface dams to capture and store the precipitation generated by the atmospheric rivers that have come to punctuate the overly long dry periods separating them. Others argue that above surface storage’s days are over, requiring a move in the direction of subsurface storage methods such as spreading grounds, aquifer recharge and stormwater capture. As with so many things characterizing the age, this difference too breaks down along Partisan lines, with advocates of the former almost all Republicans and advocates of the latter almost all Democrats. That’s all you need to know as to which direction California is going on this subject. And all you need to know as to the direction the golf community needs to steer its strategies and priorities as it seeks to cope with life in this land of permanent drought.

We’d like to write that it’s not as bad as it looks, but it’s worse. On paper 2022 is shaping up a lot like 2015-2016 in terms of precipitation deficit. But that deficit is being factored through a set of conditions changed by a warmer and drier climate – otherwise known as more of it falling as rain than snow and less of that reduced snowfall turning into runoff that can be captured, stored, and transported to those areas of the state not able to support their populations, businesses, farms, and recreational amenities through what Mother Nature provides. By the way, not all of those “areas” are in the southern part of the state; San Francisco is 100% dependent upon imported supplies from Hetch Hetchy.

Our Northern California counterparts, and increasingly our Central California counterparts too, are already in the throes of drought. Counties such as Sonoma, Marin and Santa Clara are imposing mandatory cutbacks on golf and domestic/small business outdoor irrigation. Voluntary cutbacks, which are almost always precursors of mandatory ones soon to follow, are the order of the day in numerous other counties. Farmers are fallowing fields throughout the Central Valley because the wells they tapped the last time their allotments from state and federal water projects were cut back this severely have run dry.

Southern California isn’t there yet, but if the next precipitation season isn’t a fecund one, we’ll be right there with them. Based on the hands-on work golf has done for the last decade with the region’s major water providers and public utilities, Southern California is better prepared to deal with what may come in the short run than our Northern California counterparts. When push comes to proverbial shove, all those task forces, relationships, joint efforts, and education conferences matter. It’s one thing to actually have invested fortunes in maximally efficient irrigation technologies, warm season grasses, curtailed overseeding protocols, turf removal, and the like; it’s quite another to communicate those investments and the commitment to long-term sustainability they represent to those who make and execute the public policies that spell the difference between continuing to be a significant feature of life in this land of permanent drought and going the way of the dinosaur.

There’s good news and bad news in all those prior investments cum conservation accomplishments. Just as Californians have continued to use 16% less water than they did in 2013 despite no longer being required to conserve, the golf industry has continued to use substantially less as well. And for golf that represents a “less” that comes on the heels of 25 years of a steadily declining water footprint. Where’s the bad news in that you may ask. There are only so many conservation cards in golf’s deck, and each succeeding card is more onerous and expensive than the previous one played. Yet, unless Mother Nature comes to the rescue starting October 1, the world will only continue to look benignly on the golf community if that past performance acts as a springboard to an even more robust future performance.

As for the longer run, let us refocus your attention on that “direction” California is sure to take with respect to moving away from above surface storage methodologies to the next generation of storage methodologies like aquifer recharge, stormwater capture, potable reuse, and a smattering of desalination. That’s an expensive direction! For a large water consumer like golf, how that expense is divvied up between ratepayers and the collective can spell the difference between a future California golf community that is either smaller or larger than it is circa 2021.

Lest you think we were going to leave you with nothing but bad news in this Update, there is actually some very encouraging news on that last count, and it involves the $1 trillion infrastructure bill that the United States Senate just passed on a 69-30 bipartisan vote. It turns out that there is much in there designated for water projects in the western part of the country, and while final decisions about what specific projects get funded are to be made by the U.S. Bureau of Reclamation, the fact of the matter is that most of the projects eligible for funding are in California. And among those “eligible” projects are the usual suspects – old dams and canals in desperate need of upgrades – but also for the first time in the history of federal water management new suspects like groundwater storage, recycling, desalination, and ecosystem restoration. “Suspects” that we would term 21st Century methodologies.

Check out the following infographic and get educated on Golf's usage of water in SoCal.

FORE - The magazine of the SCGA. Find archived Governmental Affairs articles on the website of the SCGA's award winning quarterly publication.

Virtually every major newspaper in California carried a front-page story last week about Californians having responded to Governor Newsom’s call for 15% voluntary water cutbacks by cutting back a paltry 1.8%.

California’s 2021 legislative session closed Friday. Some bills are on their way to the Governor’s Office for signature; others didn’t quite make it this session. As in all legislative sessions, the vast majority of the bills filed at the beginning of session died somewhere along the way, most of them much earlier than Friday at midnight.

FOCUS ON THE STATE

All politics are local. As is the case with all clever aphorisms, that one too has its limits. Some politics are state. More germane to this update, some public policies that affect the golf industry are decided at the state level. And it is to a few of these that we address your attention today.

DROUGHT – THE NEWS IS BAD BUT NOT ALL BAD

At risk of hammering away at what you likely already know, here is how California’s major reservoirs stood as of midnight August 8.

We were so impressed with the Golf Strategic Plan that Los Angeles County released last week that we thought we should share it with others.

SCGA members who live in proximity to Los Angeles County’s Victoria Golf Course in Carson will be receiving information from SCGA later this morning (Friday) about how to participate in an online survey as well as two (2) public meetings in August about what to do in the wake of the demise of the Kimmelman half of what was supposed to be the redevelopment of this long troubled 18-hole regulation golf course.

To answer the most asked question about COVID, while there are many counties in California that are now recommending that all persons wear face coverings when indoors, there is only one that is mandating the use of masks when indoors – Los Angeles County.